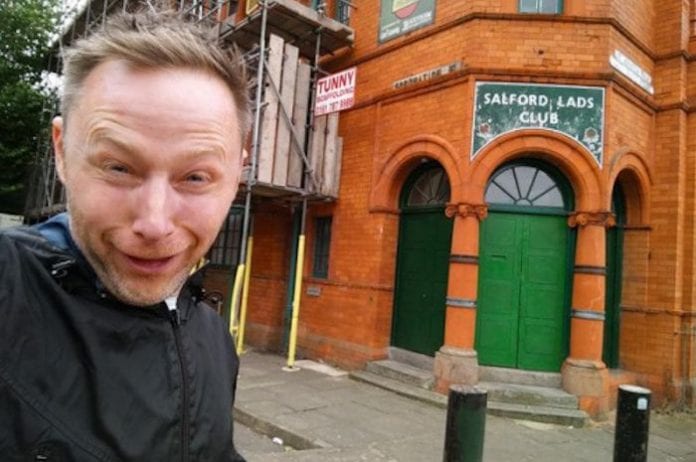 ‘A major cult favourite’ is the quote on the front of his acclaimed book Daft Wee Stories and it’s pretty accurate. Despite being held in such high regard in the comedy world, the BBC took the strange decision to only air Limmy’s Show in Scotland. But despite this, Brian Limond is on something of a roll at the moment. He’s also a huge personality on Twitter. We tweeted @DaftLimmy and asked him for a chat. He said “aye”.

So we phoned him up to ask him about his hing.

On Limmy Live and returning to the stage

I wasn’t gonna to get back into live stuff. The last thing I did was in 2008 at the Fringe. I prefer telly stuff, it’s much safer and you can direct it, edit it and add music. Live stuff is more risky. But because of the book and the live shows that went with that I thought I may as well go all in and do Limmy’s Show live.

This time ten years ago I had a podcast called Limmy’s World of Glasgow. It was a daily thing for 12 weeks. It had characters like Dee Dee and Jacqueline and I did that to get noticed. I wanted to get into comedy professionally somehow, but I didn’t know how. Eventually some promoter in Glasgow said do you want to do a live show for the Glasgow Comedy Festival. I said no to begin with but my girlfriend told me to go with it.

It’s going to be in two halves. The second half is the big characters I need to get changed for, like Dee Dee, Falconhoof and Jacqueline. The first half is more characters like Raymond Day and Mr Mulvaney. They’re all in suits so I can do character stuff but not really leave the stage. It’s mostly characters people know doing new things but they’ll be old sketches with a twist so it’s not word for word.

On getting his BBC sitcom

Before I went travelling in 2005 I made a DVD of videos that were on my site and one of them ended up at the comedy unit in Scotland who’ve produced Still Game, Rab C Nesbitt and other things. I got the email when I was in Australia and it said we like your stuff, we like you and so what do you want to do? I thought magic, I knew I wanted to do sketch stuff, my standup was a bit like Dave Gorman where I’d be pointing at screens. Those kind of things translated well into the TV show.

Dee Dee is based on me. The year I left university I didn’t get a job for a year so I was sat about, signing on, sitting about till four/five o’clock in the morning watching Teletext, watching adverts for 20 CD power ballads and noticing wee mistakes in the advert. I told my pals down the pub about them on a Saturday, all of whom had jobs, and I’m going on about that shite. I wasn’t on anything like dope, I’ve never been a stoner. He’s mostly a guy who’s heads gone to pot, not like the drug, but his head’s turned to jelly – that’s what I’m like if I’ve got nothing to do for a long long time.

On Dee Dee’s trip to Yoker

That’s based on when I was in primary school. I had this bus pass hing. I would go up to the town, south side of Glasgow and I’d see this bus go past to Yoker. I’d be like “what sort of fucking place is that, Yoker? What’s that like?” I could use my bus pass to get on and go. Thing is, there’s these zones I couldn’t go in, so I would have been chucked off if they checked. So if I got there and couldn’t get back, I’d be stuck in Yoker with Les Porter and people would know I’m not from Yoker.  I used to think that.

We also went to Govan once, had a wee look about, saw a bloke with a skinhead and got back on the train. We shat it. Thought people would look at us and go ‘they’re not from here’.

On appearing on Charlie Brooker

He likes my stuff on Twitter, we follow each other, then his folk got in touch with my agent and said have you got any ideas for my show? That happens a lot. Matt Lucas got in touch like that too, just saying would you be interested?

The railings did actually get painted about a couple of months after the show went out. We went past them and these community payback guys, like a chain gang, were painting them black. They used to be green and rusty. It’s a big, fucking park but there’s a tiny wee bit at the bottom they’ve missed, near the grass where they’ve not wanted to touch the grass. They need to find a solution to that.

I’m gonna take my camera down and go “I’m sorry, people might be lying on the grass and see that and go ‘fuck this, fuck this park, fuck Glasgow, I’m leaving’” and that’s council tax gone, income gone, before you know it everyone’s left.

Aye, that was the day she died. I did that at night. I was doing webcams quite a lot, yabbing away, dancing and doing karaoke. When I heard about Maggie, I don’t know how it happened, I cannae remember if Pitbull came on or I put it on, but it did and I chucked in a Neil Kinnock rap and payed my respects to Maggie.

On having a sick sense of humour

I like saying things that are fucking out of order. That’s just how I’m wired. When I’m out with people, I like having opinions about things I don’t care about, because it’s out of order and makes people laugh.

People on Twitter who don’t know me will try and point out why I’m a bad person, but I’ve got to the stage where I just think, fuck it. I remember when my mum died when I was 20, and the next year there’s Mother’s Day stuff on the telly, and I’m thinking, they know there’s wains without mums out there and they’re still pushing ‘That’s why mums shop at wherever.’ They’re not worried about triggering people’s emotions. Life keeps rolling on and you have to deal with it.

On the sound of the summer

Check out Daft Punk’s new single “Get Lucky” if you get the chance. Sound of the summer.

Aye, there was a time it stopped for a reason on IFTTT, went into an idle mode on the telly. But now it’s been constant for a year now, if I walk out and get hit by a bus it’ll keep going and I don’t think my girlfriend will know how to stop it. She’ll be pleading with them to stop it, but I’m like, keep it fucking going for 300 years or something.

Some people try to get a rise out of me by pointing out it was a hit like three years ago, but I don’t bite. Other people think I’m just nuts and are serious when they get angry with me.

On trying to make friends on GTA V

Limmy will be playing the Salford Lowry on the 13th September. Tickets are available here: www.thelowry.com/event/limmy-live