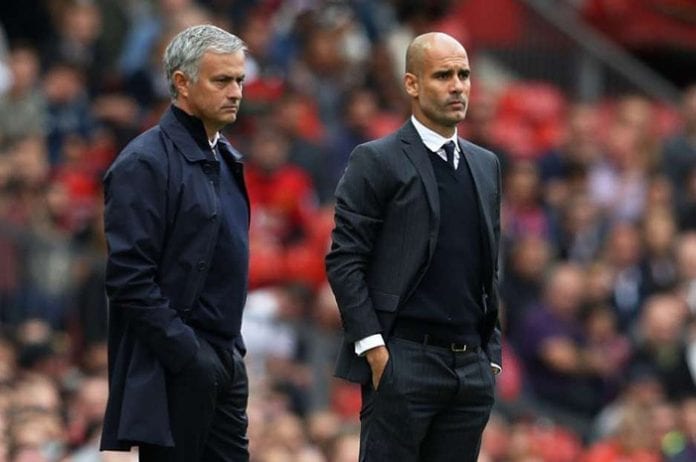 So now we’ve got the Charity Shield out of the way and we’ve all sorted our Fantasy Football Teams out, the 2017/18 Premier League season is finally upon us.

For the first time in the League’s history the opening game of the season is on a Friday night but champions Chelsea have been benched for TV until the second weekend of the season.  Arsenal welcome Leicester to the Emirates for the season opener instead.

Two teams not short of TV exposure are the two Manchester teams.

City get their campaign underway Saturday teatime away to Premier League new comers Brighton whilst United kick off their title challenge on Sunday afternoon at home to West Ham.

If TV coverage is anything to go by United have chalked up early points on the board as their fans don’t have to listen to the BT Sport commentary with their opening game being shown on Sky Sports.

United have their first five opening games broadcast, whereas City have to settle for their first four games being televised.

There is also the small issue of the pre-season friendly victory.  It may have been a friendly but the boys in blue will be eager to avenge that loss when they visit Old Trafford on December 9th for the first Manchester derby of the season.

United will find themselves facing some familiar faces in on-loan City keeper Joe Hart and fan favourite Pablo Zabaletta who left City this summer following 10 years at the club.

But it may be a former player who causes them problems as Javier Hernandez makes his debut for the Hammers.

“For me, the Premier League is the best league in the world and when the opportunity came, I was desperate to sign for this club,” he told the club’s official website.

“It was not a difficult decision. West Ham is an historic club, and very ambitious – this summer you can see with the players signed that they are looking to have a very good season.

“I’ve had three fantastic years playing in Spain and Germany, but England was really the first big chapter in my career and I am so happy to be back.

“I am desperate for the season to start and to help the team achieve all their objectives.”

Both clubs have been busy in the transfer market. Pep Guardiola has concentrated on a much needed defensive overhaul whereas Jose Mourinho has replaced the ageing Wayne Rooney who made a return to his boyhood club Everton and one season star Zlatan Ibrahimovic up front.

City have splashed out just short £200 million on four defensive players and I think we can all agree it was necessary.

The arrival of Ederson for a fee of £36m will make fans a lot happier. Bravo has been absolutely terrible since his arrival to dethrone Joe Hart as City’s number one. England’s Kyle Walker, Brazilian Danilo and Frenchman Benjamin Mendy have also joined the City family.

United haven’t exactly stood still either this summer with Jose apparently getting the signings he desired.

Midfielder Nemanja Matic has joined from Chelsea for an undisclosed fee and defender Victor Lindelof signed for 31m from Benfica.

But the most interesting is Lukaku from Everton with a big price tag but a player who threatens to bring the free scoring United of old back to the Mourinho era.

Pre-season has been a great indication that ‘The Special One’ is in fact willing to adopt the United attacking philosophy.

Neither manager is done yet though I’m sure, with City still linked with Arsenal’s Alexis Sanchez and United keeping a close eye on the situation with Gareth Bale at Real Madrid even though the Welsh star played in the UEFA Super Cup against United last night.