A huge outpouring of tributes from his friends followed his death on March 1st, with over 1,000 people attending a special memorial service at Gorton Monastery on April 5th.

Now, in Craig’s honour, Panacea have announced that the Easter Sunday Cuckoo’s Nest will be The Greatest Showman, themed as a special tribute to him.

Announcing the event this week, they said: “This Sunday’s #CuckoosNest will be a tribute to Panacea’s greatest showman, Craig Bieszke. In Craig’s honour, we promise you unbridled chaos, marvellous mischief and magical mayhem unleashed.”

Chris also shared the news on his Facebook page saying: “This Sunday’s Cuckoo’s Nest will be a tribute to my amazing brother Craig Bieszke The Greatest Showman!

“So join us as we celebrate the life of crazy Craig, a man of boundless energy who has been part of the Panacea family from the very beginning.  DM me to get involved in the show. This one’s for you Craigy my boy.”

Craig has been fondly remembered by all who knew him since his death.  In an emotional Facebook tribute to his twin, Chris thanked family and friends for their overwhelming support.

In it he wrote: “Your legacy and your laugh will live on forever and ever and I and anyone you ever met will never forget you.  Craig was a one-off… Never to be seen again. Craig’s personality, passion, humour and love for life will never be matched.

“How do you sum up the most amazing, inappropriate, affectionate, over affectionate, attractive, fun loving, life-living, attention grabbing, best dancing, loveable, better looking twin (in his own words) and most annoying; but most of all the most amazingly loved guy ever? My irreplaceable brother… The only person that could get away with anything, literally anything and make me laugh and everyone else laugh like they’ve never laughed before. You were absolutely outrageous but the most beautiful and pure person with a heart made of gold!”

The Cuckoo’s Nest presents The Greatest Showman will be at Panacea on John Dalton Street on the evening of Sunday, April 21st. 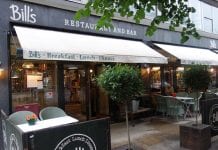