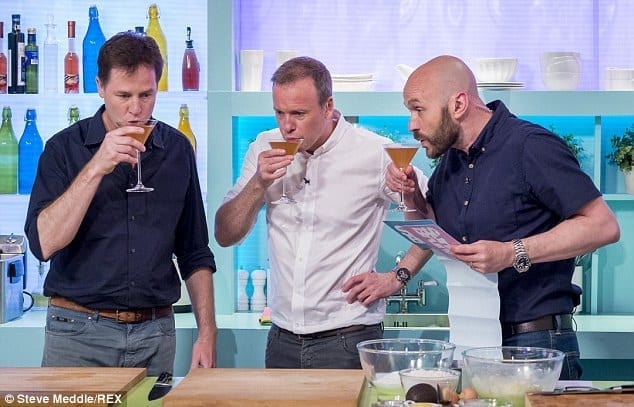 If you watch Channel 4’s Sunday Brunch, as I sometimes do, despite a severe aversion to Tim Lovejoy (he used to support Watford until he realised they weren’t very good, so started supporting Chelsea), you may have noticed Liberal Democrat leader Nick Clegg dressed in his casual man-of-the-people best, giving an interview which he’s been roundly hammered by many other politicians.

“…running out of ‘talent’ faster than
Tim Lovejoy is his hair.”

Why, they said, was he appearing on a fluffy weekend magazine programme which also features cocktail tasting, burger recipes and irreverent half-wittery when such heavy world events were making the news agenda creak?

What they fail to understand is that more and more, food shows are a bigger pull than news programmes.

Compare the viewing figures of Sunday Brunch (800,000) to those of Newsnight (590,000), with the latter recently announcing a 5 per cent dip since September.

More people would rather learn how to use Paxo than listen to him, it would seem.

Food and drink shows are watched by a broad cross-section of voters, many of which sit in the more affluent demographic.

So what then, of Come Dine With Me, the once essential foodie fixture which now seems increasingly desperate for participants?

This week, they’ve been hawking themselves all over Twitter, in a fairly desperate way, to anyone even remotely associated with food. Including several bars and restaurants which are now closed.

COME DINE WITH ME is coming to MANCHESTER! Want to win a GRAND? Email cdwm@itv.com to apply. Please RT? #CDWM@MCFC

There’s a new format (couples) but is the star waning? It’s one of the most repeated shows on TV – more than 120 episodes a month in some cases – and at its 2011 peak, was watched by more than 2.3m people regularly.

It was a career booster for fading celebs, WAGs and any other mentalist who wanted to do something outrageous on the telly. Meanwhile, increasing numbers of viewers complained that personalities had taken precedence over food and the original concept.

ITV continues to make them though – more than 30 series and 1,300 episodes have been made – but they must be running out of ‘talent’ faster than Tim Lovejoy is his hair.

But when you consider that one of the fiercest political opponents faced by the incoming Tory/LibDem coalition was Jamie Oliver and his school dinners crusade, it’s little wonder Clegg felt the best person to talk about a life in politics with was Simon Rimmer.

Of course, when politicians want to advance their motives, Question Time is still the big draw, with 2.7m viewers.

And most of them are eating.