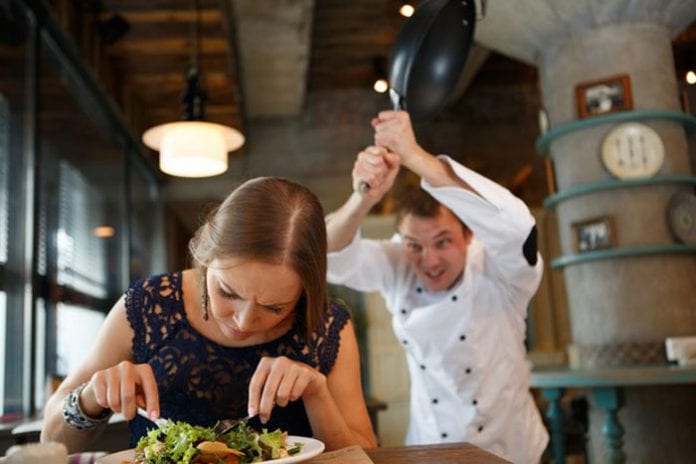 I hate TripAdvisor. But it still matters, unfortunately. A panning can hurt a business because some people still refer to it. A few establishments seem to receive hundreds of amazing Trip Advisor reviews on their opening night from accounts with a surprising lack of information and all using the same images. I reckon it’s dodgy as hell and you shouldn’t trust it.

It shows no signs of going away so in the meantime all we have is ridicule. Step forward, Chiefs of Trip – a humorous, occasionally non-PC analysis of the biggest ‘weapons’ on the site.

‘Why don’t you put the weight of the food in grams on your menu?’ this absolute chief asked @simon_rogan at @FeraAtClaridges pic.twitter.com/UHXCqrwVH3

A chief is that guy at work that reckons he knows everything – that kid that laughed at you when you brought your sandwiches to school in a Morrison’s carrier bag. A weapon is his dickhead little mate.  Simple enough.

Someone has to keep the chiefs in check. It’s hilarious watching these absolute weapons acting like even shitter versions of Gregg Wallace.

Chefs work their balls off and sometimes a meal just isn’t perfect. Front of house staff too. Sometimes stuff just goes wrong. These jumped up Middle Englanders of Trip Advisor need to realise they are looking like absolute weapons every time they claim a restaurant is worth one star and ‘should be avoided at all costs’

Does that mean food critics are all chiefs?

Reviewing is important and an art in the case of some food critics like Marina O’Loughlin and Jay Rayner. Positive reviews from these two can make a small business. The difference is they only ever target bloated restaurants from hedge fund investors for a roasting on the weekend. If they don’t like a meal at a small place they don’t review it.

Most restaurateurs are scared to anger the beast of TripAdvisor. Some businesses rely on ratings so will always apologise and suck it up. That’s totally fair enough so I want to provide a service where I will answer back for them – outing the chiefs, weapons and fuckwits of Trip Advisor.

So, given all that, are there any positives of Trip Advisor?

I doubt it mate.

Yesh believe that trip advisor shit, you will miss out on a fine fine meal @StickyWalnut, truly brilliant

How do you complain without being a chief then?

Easy. There and then. Restaurants and chefs aren’t flawless are they? Of course they’re going to fuck up occasionally but you have got to let them try and fix it. You have to let them do that whilst you are still there. Don’t scuttle off back to your spare room to try and plot to cripple them like some shit Bond villain.

How do you spot a Trip Advisor bullshitter – someone who claims to be Jay Rayner and in fact is just a clueless chief?

Simple. They are writing a one star review. Bottom line, when have you ever gone anywhere and it actually been literally zero percent? It just doesn’t happen. To be one star the chef would have to spell out ‘your mum likes it hard’ in raw sausage meat before telling you your trainers are shit and that they are out of the winter berry pavlova.

Just look at the chief who claims to have visited over 120 countries in the world. That’s the same amount of countries as the queen! He’s just a liar. What else is he lying about? We can’t trust his review can we?

Oh, and they are total dogshit at using correct grammar. But I ignore that with my annotations. Too easy.

This chief claims to be the most travelled man in the world and he didn’t like Le Gavroche. Poor old @michelrouxjr pic.twitter.com/QBuPOuwDqo

Is there a profile of a typical TripAdvisor moaner – a certain ‘type’?

Yeah, a typical chief of Trip Advisor will buy the Daily Mail, have voted Brexit, pull their trousers at the knee before sitting down and know the exact price of unleaded at every petrol station within a three mile radius of their house.

It’s the sense of superiority that singles them out as an elite group of dickheads. The amount of absolute weapons that open their ‘review’ with: ‘I have dined in most fine-dining establishments across the UK.’ Oh yeah, is that right? Well why are there only three reviews on your account and every one of them is trying to shaft a small business? Cocks.

How should chefs react to chiefs?

Tell them to fuck off and point them to Trip Advisor and hopefully we’ll all laugh them out of town. Nobody in their right mind actually gives a fuck about TripAdvisor. Let’s show up Trip Advisor for what it really is and release all these struggling small businesses from its dirty little grip.

Whether you agree or not with this profiling of your typical TripAdvisor moaner, Chiefs of Trip has its heart in the right place. I’ve seen 1 star reviews for a meal not being someone’s ‘cup of tea’ Why order it then? Don’t take the chiefs seriously, people. And don’t be a weapon either. Got it? Good.

Follow @Chiefs_of_Trip for your daily dose of Trip Advisor bullshit.