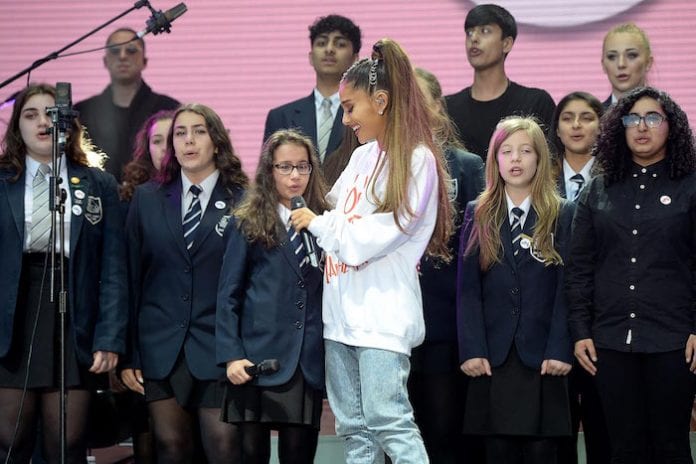 Parrs Wood High School Harmony Group are back on stage next month to perform in the immersive pop-up experience, Love Actually Live.

The high school singing sensation captured the hearts of the nation when they sang on stage with Ariana Grande at Old Trafford for the fundraising concert, One Love Manchester, just a week after the arena explosion.

They were invited to perform at the concert after a YouTube video of their tribute version of Ariana’s song My Everything went viral, and their moving stage performance exemplified Manchester’s strength and resilience.

Since then, the soulful singers have continued to perform at charity events and have raised more than £25,000 for the victims of the attack.

This time, the choir will be accompanied by a live band made up of fellow students and staff from their school, in an immersive interpretation of the Richard Curtis classic.

Musical director and vocal coach at Parrs Wood, Daniel McDwyer, says: “We are delighted to be able to perform at such a unique series of events in our home city.

“Love Actually is one of my favourite Christmas films and all the staff and students are so excited to be involved.”

In what promises to be ‘unique cinema experience’, Love Actually Live will include a big screen showing of the popular Christmas flick, alongside live musical performances and festive food and drink.

The Parrs Wood performers will be channelling the Christmas spirit with special renditions of carols and popular songs of the season.

To ensure that love really is all around, a portion of the ticket price will be donated to the choir’s designated charity, the We Love Manchester Emergency Fund.

“It’s with thanks to the organisers that we’re able to perform at the shows, while raising money for the We Love Manchester Emergency Fund”, Daniel continued.

An extra screening of the Lambrini-sponsored event has been added at 1.30pm on Saturday 9th December, due to overwhelming demand for tickets.

Love Actually Live takes place at The Mayfield Depot on Friday December 8th and Saturday December 9th. Tickets are £14.99 and available from loveactuallylive.com.