The Northern Quarter is aiming to clean up its act. Nominated in an internet forum as the “filthiest place in the UK” by one of its own residents,  I Love MCR is backing two projects which are taking place in the area as part of the Great British Spring Clean – a massive campaign involving an army of 47,000 volunteers and 2,000 clean-up events nationwide.

The irate resident complained online that he felt as though he was living in a slum and “couldn’t believe the amount of takeaway wrappers, half eaten food, and alcohol bottles on the floor”.

The Northern Quarter Forum has registered the two initiatives under the banner Clean, Green and Proud, with local residents and retailers including The Butcher’s Quarter and Olivier Morosoni getting involved.

Part one starts on Friday 3rd March at 10.30am outside Northern Flower on Tib Street.  Businesses and residents are being invited to sweep, clean, mop and hose down the perimeter of their premises and then spread out to pick up litter throughout the Northern Quarter.

The following day at 10am, volunteers will meet at the brush and shovel sculpture on Thomas Street for a two-hour blitz on the litter and rubbish that degrades one of the city’s most popular areas. 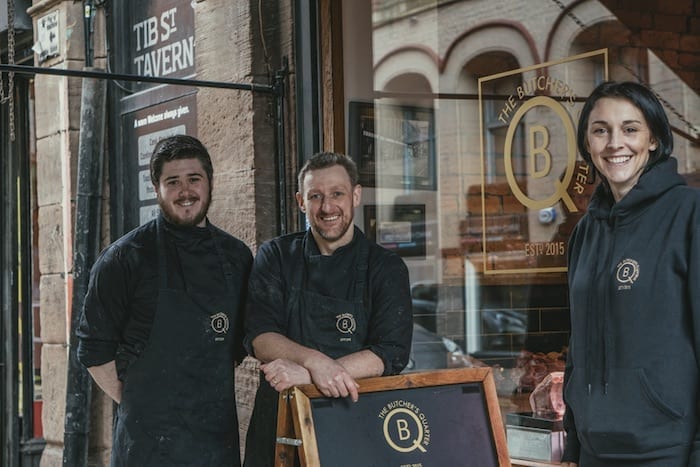 The Forum’s pitch proclaims: “We aim to give the area a thorough clean and tidy so we can be proud of our area once again. Once clean, we want to be ’green’ by encouraging everyone to add a spot of colour to their space with hanging baskets, window boxes…anything, even a can with a plant in it. We want people to have pride in their community and take care of their own perimeters”.

The team of volunteers will also take to the streets of the Northern Quarter between 8pm and 9pm to tackle the evening litterers and will engage directly with people who are dropping their rubbish. It is believed they will be accompanied by Police Community Support Officers.

Events in the centre of Manchester are being encouraged and co-ordinated by Chris Gandolfo, the council’s neighbourhood officer for the city centre. He appealed for groups from Chinatown and The Village to register their own projects for the Great British Spring Clean as groups in the Northern Quarter, Ancoats and Castlefield have already done.

Asked why local businesses didn’t regularly spruce up their own street frontages on a daily basis like those on the continent, he said: “I think it must be a cultural thing”. He said that here, people are inclined to see litter as primarily the council’s responsibility.

“We have a duty of care to keep the streets clean and we do all that we can with the resources available. But we would hope that people would take up their own responsibilities and especially clean up underneath their bins,” he added.

I Love MCR is staging its own clean up initiative in early April and is aiming to recapture the spirit of 2011 when an army of volunteers helped clean up Manchester after the mayhem and destruction of the August riots.

We’ll draw up a shortlist of places and choose the one we’re going to blitz.

If you want to muck in and help clean up the Northern Quarter go to www.greatbritishspringclean.org.uk and search for Manchester events where you will find all the clean up activity that’s going on.