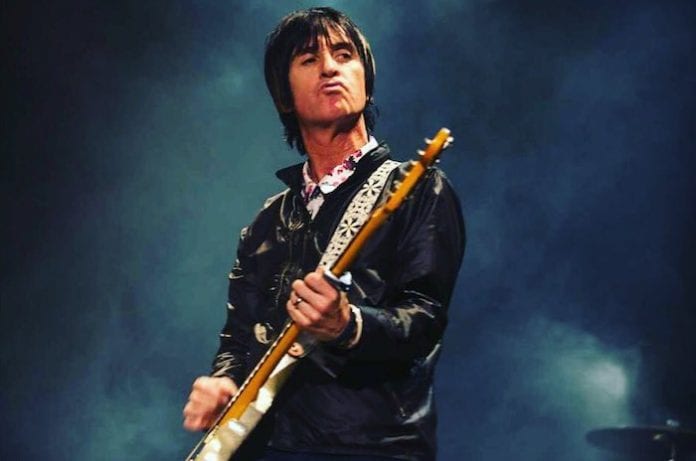 There are certain moments in our lives that we recall vividly. Moments that don’t involve  births or deaths yet somehow touch on the fringes of the emotion of those great events.

I remember the day I received the white promotional copy of the very first Smiths album. I was working on BBC Radio Derby at the time, doing a 90 minute specialist music radio show each night.

I already knew what I’d do. I went on air at 6.30 and mumbled – all Mancunians mumbled in those days – “This is the new album by Manchester’s The Smiths. It’s brilliant. It’ll be in the shops in about a week’s time. In the meantime, here’s side one.”

I allowed the album to play through – including the empty spaces between tracks. And then I said, “That was side one of The Smiths. Here’s side two.” My boss went mad at me.

I’d met Johnny Marr and spoken to him several years earlier. In the autumn of 1981, we’d both taken part in a chat show on ITV called Devils Advocate. It was filmed at Granada and networked at 6.40pm every Sunday night for eight weeks.

At the time, we were amongst 100 unemployed youth aged between 16 and 21 from inner city Manchester who had been invited to discuss the effects of unemployment on them. The recently released Scarman Report on the 1981 summer riots in Moss Side, Brixton, Toxteth and Handsworth had claimed that one of the main causes of the riots was the high level of youth unemployment.

What I remember about Johnny Marr at the time was that, in a world of working class low self-worth, here was a 17 year-old kid who seemed so focused and completely unashamed to say what he wanted to be and do in life.

It’s hard to explain how unusual that was in that era. It was an era when hardly anyone between the ages of 16 and 21 had a job in Manchester, thanks to Thatcher’s destruction of the UK textile industry, a major employer in Greater Manchester and the north west. A generation of teenagers was thrown on the dole almost overnight.

Johnny Marr was there on national TV unashamedly saying that, apart from the money, he didn’t mind being on the dole as he just wanted to be in a band and play the guitar.

When he said it, I remember a sharp intake of breath from the other 99 kids, especially as he was faced with Gus Macdonald – a presenter who’d make Jeremy Paxman look like Lorraine Kelly.

Macdonald was almost apoplectic with rage and disgust, asking witheringly if he should work and pay his taxes so that Marr could sit on his behind all day playing the guitar. The look on Johnny’s face spoke volumes as he shouted defiantly, “Absolutely!”

Strangely enough, when I first heard Hand in Glove, I knew instinctively that it was Johnny Marr’s band because it had the balls to be both vulnerable yet somehow defiant.

The Smiths became a soundtrack of that feeling of not being worthy and yet knowing inside you had something to offer.

For many of us, the music and lyrics immediately conjured up those old terraced streets, the daily struggles of getting by, the fight against emotional neglect, the stifling anonymity of those working class areas, and being cut off from aspiration and inspiration.

Through The Smiths, Thatcher’s Britain at last bore something fragile and beautiful that still resonates to this day.

That same self-confidence brought Johnny Marr to leave The Smiths. Without Johnny Marr, there was no Smiths. That special dynamic was gone.

I thought long and hard about that. You’re in the most important band of the 1980’s yet you decide, aged just 23, to turn your back on it because it doesn’t feel right. You never go back, preserving everything that was special about it forever.

Unimaginable in some respects yet somehow right, because to go back would feel unnatural, like it would somehow stick in your craw.

When Johnny Marr received his GQ award earlier this week, I thought about all the other great music he’s been involved with. The The, Bryan Ferry, his brilliant collaborations with Bernard Sumner in Electronic, and his adventures as a guitarist.

I thought about the unique position he occupies in the pantheon of British music. About that focus and self-belief that very few working class kids ever mustered. About his ability to take Morrissey’s lyrics to a level that, even now, over 35 years on from that first single, youngsters are still drawn to The Smiths like no other band of that era.

I’m often asked who the greatest ever Manchester band is. There are arguments for Joy Division/New Order, The Bee Gees, James, The Fall, and Oasis,

But for me The Smiths felt like Manchester. There’s no other city that could have produced them or the confident brilliance of Johnny Marr .