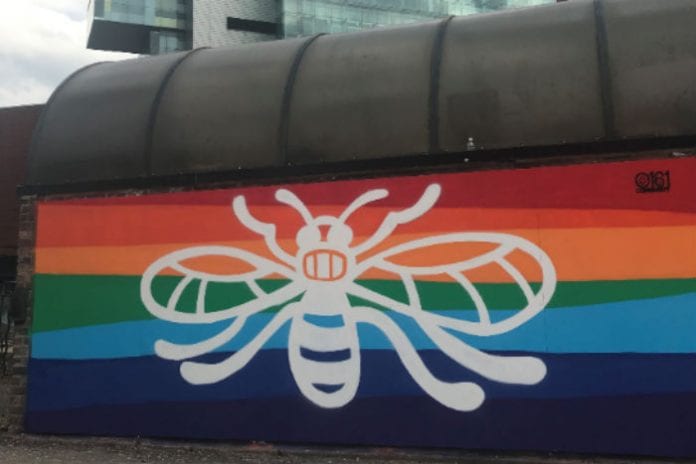 Local youth group 0161 Community have designed and created a new art installation at New Bailey as a tribute to the NHS.

The mural, which sits on the wall of the old Mark Addy pub on the banks of the River Irwell, gives a nod to the NHS with its colourful rainbow design and also features a worker bee, synonymous with the spirit of both Salford and Manchester.

0161 Community is a group which brings young people of all backgrounds together and encourages them to take control of their neighborhoods through sports and creative workshops.

Working across Greater Manchester, the group’s ethos is to ‘empower the unheard’ and provide people with skills, guidance and confidence through various activities including Muay Thai, yoga, graffiti, sculpting and documentary-making classes.

“New Bailey has a history of working with local artists to create focal points for the site and we’re thrilled that New Bailey is now home of this fantastic installation from the team at 0161 Community,” said Phil Mayall, regional director at The English Cities Fund, the team behind the New Bailey scheme.

“Salford is very much a proud city, both of its heritage and future, and Greater Manchester was also where the NHS was founded back in 1948.

“Over the past few months due to the unprecedented situation we find ourselves in, that sense of pride in our city, region, communities and keyworkers has increased massively, so we had to pay tribute to it.

“It will no doubt now be an iconic part of Salford’s streetscape for a long time to come.”

The primary artist on the New Bailey project was Jahoer Seph, illustrator and art project lead at 0161 Community.

“This project has been really fun,” he said.

“The team at New Bailey initially reached out because they’d seen what we’d been doing on social media and they wanted to show some support.

“The art we’ve created is in a really prominent location, so it made sense to do something super bright, that draws the eye. If you’re walking past you can’t miss it!” 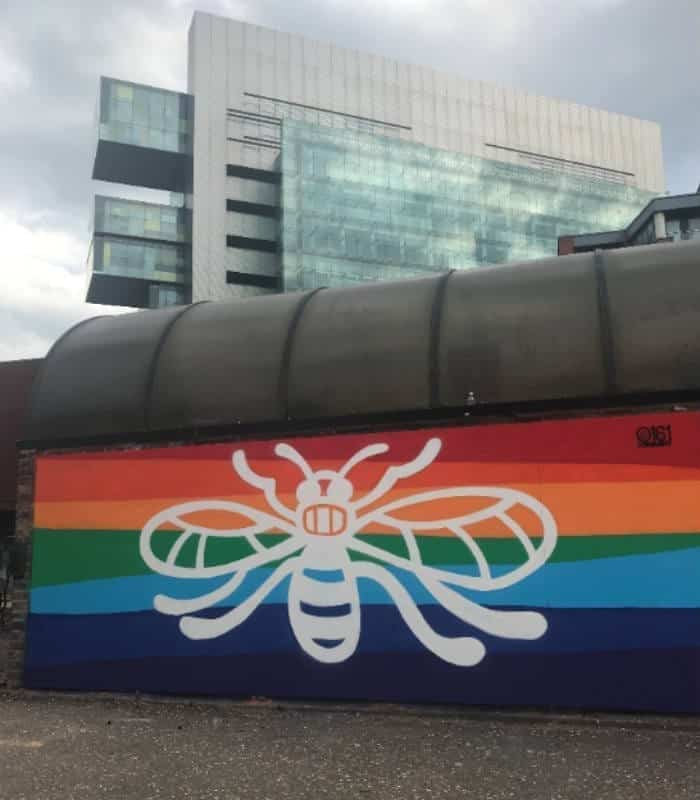 Joe Chlebik, lead coordinator at 0161 Community said that working on the project with the team at New Bailey has been a great opportunity.

“With everything that’s gone on in the last six months we thought it was the time to do something positive,” he said.

“We’re hoping people will see this story and reach out and get involved with the 0161 Community. We’re always encouraging people to join.

“This has been a strange time for us, seeing as all our classes and workshops are face-to-face. We can’t wait to be back in a room with the kids from 0161 doing what we love and teaching them skills that they can carry with them for life.”

Commenting on the installation, Salford City Mayor Paul Dennett said: “A big thank you and well done goes out to all the community who have contributed to this piece of artwork – it is absolutely fantastic that young people are creating what goes on display in our public spaces.

“The message behind the artwork could not be more fitting and will be a constant reminder of all the heroes at the NHS and all those working hard on the frontline.”

As a non-profit organisation, 0161 Community is funded through donations to go towards materials for its sports and arts programs via their website and is hoping to be running selected classes in the near future. To find out more, contact info@0161community.com.

The piece was installed on Saturday 8th August and is available to view at New Bailey now.