One of my favourite videos is Confusion by New Order. The band are in New York, there’s a girl working in a pizza place, and New Order have just recorded Confusion. The producer, Arthur Baker, has the studio tape and takes it to a club, the Funhouse.

The band arrive at the Funhouse, and then stand with the DJ, John ‘Jellybean’ Benitez, as a reel-to-reel machine plays the tune and the dancefloor fills with brilliant dancers, including the pizza girl.

The video is just one example of an extraordinary mutual love-in between the underground music scenes in New York and Manchester in the first few years of the 1980s. Factory Records, and Tony Wilson, were at the centre of this.

New York was a mythical place for all of us music fans in the UK. We devoured and admired the music of the Velvet Underground, Television, Patti Smith, Talking Heads.

By the end of 1979 the admiration was being reciprocated. Factory act A Certain Ratio secured a support slot with Talking Heads on their UK tour in December 1979, even though ACR had released just two singles and a cassette album.

In 1980 Grace Jones – who had worked with New York disco record producer Tom Moulton, and made a feature of recording cover versions – swerved into leftfield post-punk with the Warm Leatherette album which included her take on She’s Lost Control by Joy Division.

In 1980, with Joy Division just a couple of days away from their first trip to the USA, singer Ian Curtis took his own life, and dates in the States were cancelled.

In September 1980, the band – having reconstituted as New Order – finally made it over to New York, playing shows on the same bill as ACR, including one at Tier 3. Artist Jean Michel Basquiat would occasionally DJ at Tier 3, and his involvement at Tier 3 also included painting a mural on the wall between the bar room and the music room.

One night at Danceteria, Tony Wilson saw a gig by an all-girl art-funk band from the Bronx called ESG and went on to release their material on Factory Records.

The label was based in Manchester, of course, but Factory Records had an interest and influence well beyond the city. Within a year or so of forming, quickly building links to Belgium, Berlin, and New York.

The first New Order recordings were produced in New York; the band had allies in the underground clubs. Not just DJs but influential venue programmers like Ruth Polsky at Danceteria.

In 1982 when the Hacienda was opening Tony Wilson explained that the club had been inspired by “New York clubs like Danceteria”.

I was a studenty fanzine editor music lover living in Hulme in an era before Google; I had more idea of what the inside of Tutankhamun’s tomb hidden away in the valley of the Kings in Egypt looked like than I had knowledge of the Danceteria.

Nearly forty years later, researching my new book on the music and New York nightlife that inspired artists including Keith Haring and Jean Basquiat, gave me plenty of insights into venues like Tier 3, the Mudd Club, Danceteria, and Paradise Garage.

Danceteria wasn’t just a venue sparking and surfing the era’s musical zeitgeist, but was also a place where culture, art, and music collided. One night, the punk pioneer Richard Hell might perform his tough, angular, guitar music. Another night, the club might feature electro break-dancing, and street art.

The Danceteria had a video room on the third floor. The Hacienda plans put video high on the list of priorities, installing two huge screens, describing the venue as a “videotech”.

Tony Wilson also used the phrase “a style lounge”. We still had no idea what he was talking about, but we could tell Factory’s vision for the Hacienda was very different to what we were used to (the Cyprus Tavern and Rafters).

There was clearly some common ground between New York and Manchester, historically, and economically. Both cities were struggling with deindustrialisation.

In my book I talk to one of Keith Haring’s friends, Samantha McEwen, who recalled walking past empty warehouses and along deserted streets in Lower Manhattan to Club 57 or the Mudd Club just as we would on our way to the Beach club in Shudehill or the Archway on Whitworth Street.

The small scenes that grew from these places, were geographically and culturally remote from the mainstream. They were cheap, experimental, collaborative.

Young artists were doing great work in both cities. In 1982 A Certain Ratio played the Danceteria. Madonna was one of the club’s regulars – and the girlfriend of resident DJ Mark Kamins. She badgered Ruth Polsky for the support slot. To help draw a crowd to see ACR and Madonna, Ruth Polsky and the Danceteria laid on a free buffet. Sandwiches galore.

In January 1984 Madonna performed at the Hacienda; it was her first show in Europe. Ms Ciccone got the gig via Factory’s friendship with Mark Kamins. In December the same year, Kamins himself was invited by Hacienda booker Mike Pickering to be the first overseas guest DJ to play the Hacienda.

Researching those New York venues for my new book, I came to understand their attraction as role models and inspirations. They were places where hedonism and artistic seriousness went hand-in-hand. 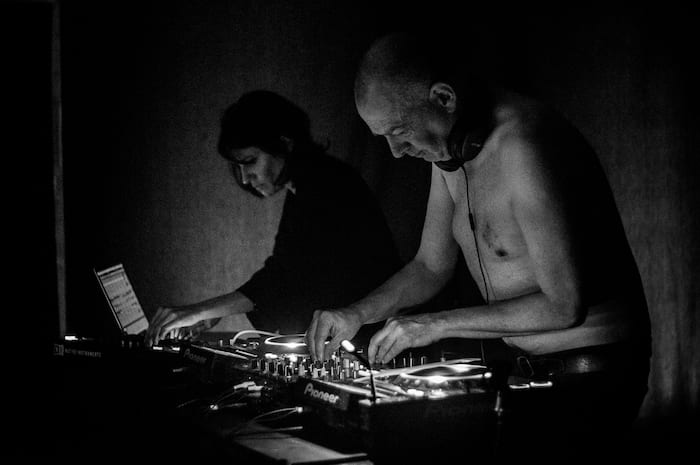 There was always an arty side to the Hacienda, especially in the early days, but this sometimes gets forgotten in the mad-for-it mythologies. One night, DJing to a full dancefloor, I was told the club had booked a contortionist and she’d be onstage at midnight.

I turned the music off while she tied herself up. She’d been flown in from New York, at some ridiculous expense.

Such things kept happening. If you asked why, the answer would always be “Why not?”.