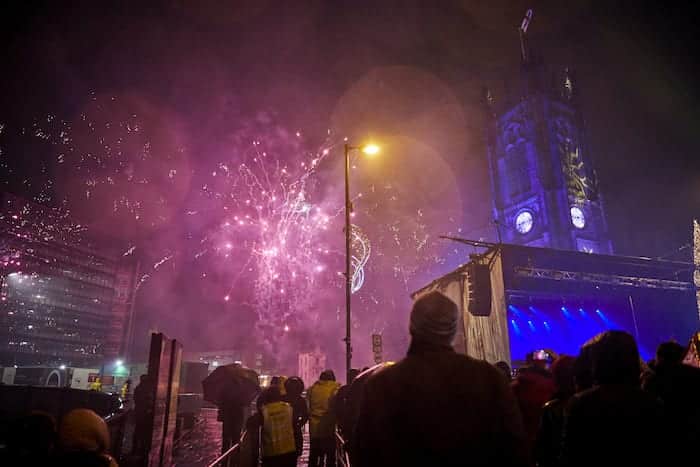 There will be a major public fireworks celebration for New Year’s Eve in Manchester at a new location for 2019.

Manchester council has confirmed that a public display and event will take place to bring in 2020 – but not on Albert Square this year.

Instead, it will move to the end of Deansgate, next to Manchester Cathedral, just as the big Christmas Lights Switch-on event did this year for the first time.

The New Year’s Eve event will start from 10.30pm on Tuesday, December 31st, with music and a big screen playing out to the crowds, ahead of the big countdown and a 10-minute fireworks extravaganza.

The event will be family friendly, with strictly no alcohol allowed.

Cllr Pat Karney, Manchester’s New Year spokesperson, said: “Following the glittering success of our Christmas Lights Switch-on event on Deansgate, we can now announce that the New Year’s Eve fireworks event will take place in the same area, near the Cathedral.

“Manchester’s New Year’s event has become a real institution and we expect thousands of people to come down, join the party and welcome 2020 in style.”

The fireworks event, which traditionally has seen crowds gather at Albert Square outside the town hall for the midnight countdown, has moved to Deansgate this year while ongoing refurbishments of the civic buildings takes place.

The Manchester Christmas Markets have returned to Albert Square this year, but with a slightly altered configuration due to the refurbishment works.

Meanwhile, the huge public Santa model has moved to Piccadilly Gardens for the first time, and was unveiled this week as a new figure, after the retirement of the popular Zippy Santa.

Zippy, in turn, has found himself a new festive home over at the Kellogg’s Factory at Trafford Park.