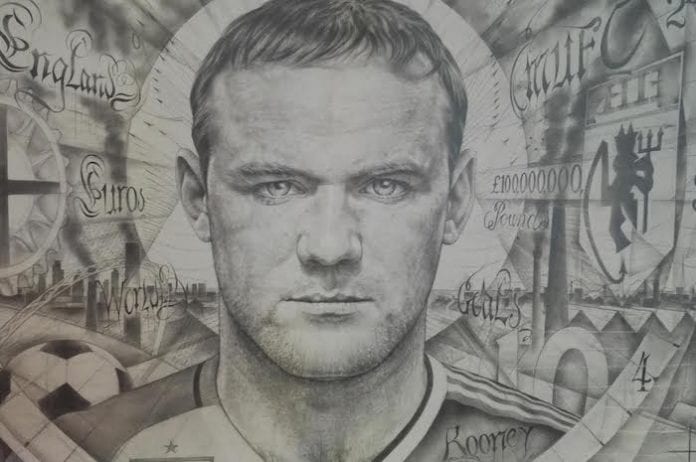 Visitors to the National Football Museum over the last few months have had the opportunity to watch award-winning local artist Michael Browne live at work in a makeshift studio. He’s been working on a new portrait of Wayne Rooney to celebrate 12 years at United.

The piece was started last September when Rooney scored his 50th goal for England and it’s been unveiled to coincide with  his testimonial against Everton.

Browne captures the striker’s sense of pride with a strong sketched head and shoulders portrait on a £50 note design. Details in the background include factory buildings in what seems like a nod to Manchester’s industrial past.

National Football Museum director Dr. Kevin Moore said: “It’s been great having Michael back at the Museum creating his latest piece of art, and it’s particularly fitting Wayne Rooney is the subject given he’s celebrating his testimonial against Everton at Old Trafford.

“Wayne has proved himself to be one of the sport’s most enduring talents, and Michael’s artwork is shaping up to be a unique reflection of his achievements for both club and country.”

The as yet untitled artwork will be on display at the National Football Museum all summer.