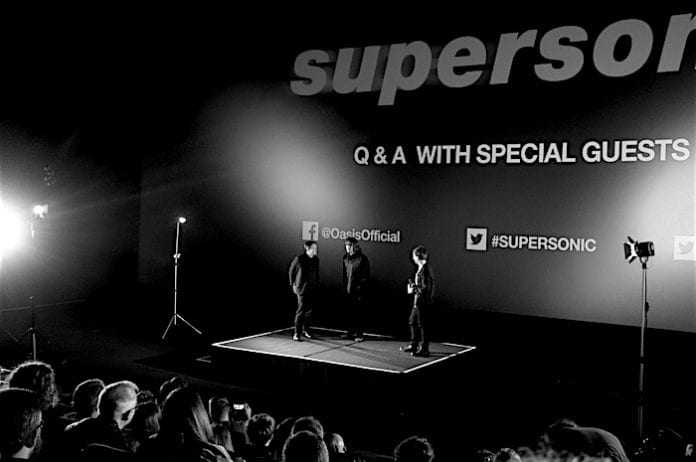 Sometimes I love my job. Last night was one of those occasions when, at the very last minute, we managed to secure a ticket for what must be one of the most sought-after events of the year – the premiere of Supersonic at The Odeon, Printworks. Not to mention the small matter of Liam Gallagher dropping in for a live Q & A directly after the screening. Bring it on.

Directed by Mat Whitecross, Supersonic documents Oasis early days from a Burnage council estate in 1993 to their historic record breaking gigs three years later at Knebworth where they were watched by over a third of a million fans in one weekend. Me included.

The film is made up of a collection of amateur home movies, band interviews, band recordings and plenty of grainy gig archive footage. The film is largely narrated by Liam and Noel, and there are moments of comedy gold with some hilarious one-liners, from Noel “I’m a cat. Liam’s a dog.” And my favourite: “Noel has a lot of buttons. Liam has a lot of fingers.”

The film is obviously dominated by the often fraught relationship between Liam and Noel with their mum Peggy popping up throughout the film. What it boils down to is their making of the band and, inevitably, their breaking of the band, too.

Initially a roadie for the Inspiral Carpets, Noel joined Liam’s band as he was the songwriter, not Liam, and he ‘had to be in the band.’ Renaming the band Oasis, they played their first gig at The Boardwalk late 1991 but it wasn’t until 1993 when their arrogance and Manc swagger saw them gatecrashing a gig in Glasgow where they were famously signed on the spot by Creation Records boss Alan McGee. The film focuses on the next three years.

Archive gig footage throughout is euphoric, sending goosebumps up your spine if you’re a fan. Early moments creating Live Forever, how they remarkably recorded What’s The Story Morning Glory? in one day, with Noel only playing it once to Liam before he had to put down the lyrics.

And Knebworth. I actually cried watching this part as the film manages to capture what a monumental weekend it was, that feeling of everyone being there to watch this one band. It wasn’t like when you go to a festival and there are loads of acts on. Every single person was there to see one band – Oasis, now undoubtedly the biggest band in the world. One of the best days of my life and watching Supersonic brought it all back. It’s a fantastic rock and roll movie, up there with the best!

And it got better. Liam parked his helicopter on the roof – as you do – and it was Q & A time. I need to make one thing clear though, relating back to Noel’s quote earlier re the cat and dog thing. You are either one or the other. Liam or Noel. I’m afraid I’m Noel through and through and if he had walked in that would have been something else . All credit to Liam though. Apparently film bosses weren’t even going to show the premiere in Manchester until he kicked off so I guess that gob of his has his good points.

We were treated to around ten minutes of his banter with Bonehead, who was in the audience and invited onto the stage, and director Mat Whitecross. When asked why Noel wasn’t there, Liam said “he’s probably in his big house eating tofu cos that’s what posh people do.’”

When would his new solo record would be out? “When it’s ready”. And the question on everybody’s lips. Will Oasis be reforming? We can’t print his reply as anorak-clad Liam’s every other word was a four letter one. It was hilarious. What a night. What a movie.