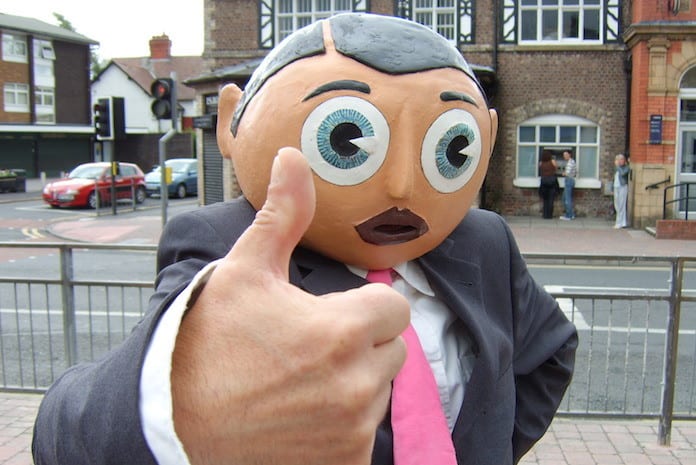 Being Frank: The Chris Sievey Story is a moving and funny documentary that traces the life and career of the man behind the Frank Sidebottom mask.

Director Steve Sullivan tells Sievey’s story through a wealth of wonderful archive material (which has now found a permanent home at Central Library), interspersed with to-camera interviews with those who knew Sievey best, including ex-wife Paula Sievey and his three children, Stirling, Asher and Harry.

There are also anecdote-heavy contributions from Jon Ronson (who fictionalised his experience in Frank’s Oh Blimey Big Band for the 2014 film Frank), John Cooper Clarke, Johnny Vegas and Ross Noble.

The extraordinary archive material contains everything from audio recordings of songs and comedy bits to video clips of Frank’s TV shows and concert appearances, as well as drawings, photographs, fanzines, comics and general memorabilia.

It reveals Sievey as a prolific and talented artist, as well as someone who apparently never threw anything away.

In particular, the film portrays Sievey as someone who was both fuelled by astonishing creativity and arguably ahead of his time. For example, in the very early days of home computers, he released a 7-inch single with a song on one side and a primitive computer program on the other.

Sullivan tells Sievey’s story chronologically, beginning with his birth in Sale in 1955. A gifted musician from an early age, Sievey had a brief taste of success with his band The Freshies, notably their 1980 novelty single I’m in Love With the Girl On the Manchester Virgin Megastore Check-out Desk.

It was Chris’ involvement with The Freshies that led indirectly to Frank Sidebottom’s creation. After making his famous papier mache head for a Halloween party, Sievey wore it at one of the Freshies’ gigs, posing as a superfan of the band.

From that moment, Frank Sidebottom was born, and the character continued to evolve, making appearances at gigs and on TV long after The Freshies had broken up.

At the height of his fame, Frank even had his own TV show, fronting Frank Sidebottom’s Fantastic Shed Show on ITV.

The film’s most fascinating section explores how Frank wasn’t just a comic creation but a fully-fledged alter ego for Sievey, almost like a second self.

To preserve the mystery, Sievey took pains to ensure that he was never photographed or filmed without the head on. The fact that the film contains rare photographs of Sievey in costume but without the head is a testament to the extensiveness of the archive.

The film also traces Sievey’s complex feelings regarding Frank’s relative success, aware of the bitter irony that he had achieved the recognition he wanted, but only from behind a mask.

In later years, Sievey had a five year plan to publicly reveal his identity and forge his own career on the back of that. However, his life was tragically cut short when he died from cancer in 2010, at the age of 54.

Although the film is in part a joyous celebration of Frank’s popularity and his creator’s incredible creativity, it doesn’t sugar-coat the darker side of Sievey’s life – his struggles with drugs and alcohol as well as his chronic inability to manage his finances, all of which contributed to the break-up of his family.

Most importantly, however, the film stands as an affectionate tribute to the incredible creativity of a man who never quite received the break he deserved.

To that end, Sullivan employs a number of inventive touches in the film (from soundtrack choices to animated inserts) which one senses Sievey would have approved.

Insightful, moving and laugh-out loud funny, this is a superbly made documentary that’s a must-see for die-hard fans and newcomers alike.

Being Frank: The Chris Sievey Story will have a special preview at HOME on 8th March (including a Q&A with Steve) before its general release on 29th March. The exhibition Bobbins: Frank Sidebottom and Chris Sievey runs from 1st March to 30th April at Manchester Central Library.