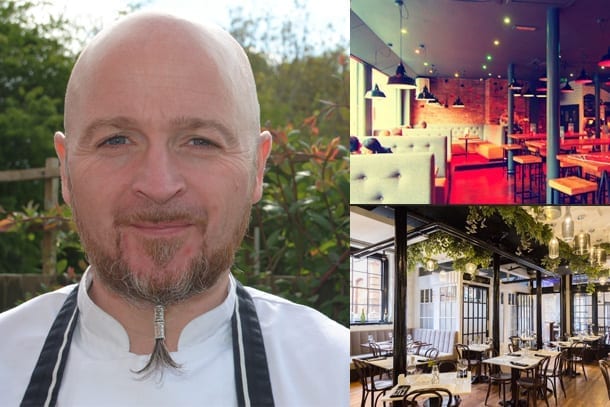 Chris Byron, an award-winning chef with over 25 years’ experience of working for high profile restaurant brands, takes over the helm of the independent Manchester-based food and drink chain.

“Rosylee is just a taste
of things to come!”

The 47-year-old, who has held a number of key positions including senior sous chef at the Belfry and Executive Chef at Thwaites Judges’ Lodge where he oversaw a £3 million development and won a 1AA Rosette, will launch a new menu at the group’s Northern Quarter eatery Rosylee as his first job.

Operations Director Jonathan Hawkins said: “We thank Rob for all his help, particularly with Rosylee, and respect his decision to spend more time with his family.

“And we’re delighted to announce we now have Chris Byron on board, who will be launching his new menu at the same time as we unveil a new look at Rosylee.

“We will be trying out dishes in the run up to the official launch with our customers, to help fine tune the new menu. It’s a very exciting time for the Rosylee brand, as we are on the verge of signing our next restaurant under that name, and for MAD as a whole. We can’t wait to reveal all on June 10.”

Chris, who also worked for The Living Room for 10 years, will play a key role in the group’s development plans, which includes a new food venture in the Northern Quarter, alongside rolling-out current brands to other areas of the UK.

His menu for Rosylee, will include new dishes across breakfast, lunch and dinner, using local British cuisine, for which the restaurant is renowned.

The father of three who hails from the Black Country says a lot of the focus will be around dishes from Rosylee’s INKA oven, one of only three in the city, which gives BBQ heat and flavour indoors.

New burgers, skewers, duck and different cuts of lamb, beef and chicken will be a mouth-watering addition.

And as a self-confessed lover of all things sweet, the re-vamped dessert menu will play a starring role with Chris’s take on brownie (made with Amoretti biscuits) his favourite.

Chris adds, “I’m extremely excited to join the MAD Ltd group, with so much on the horizon, it’s a role I can really sink my teeth into and it’s great to be able to work with such a diverse portfolio of brands.

“Rosylee is just a taste of things to come!”

Before the official launch, Chris and his team will be serving some of the new menu’s dishes with 20% off so customers can give their feedback before the final menu is revealed. Customers who want to take part should follow @ROSYLEEMCR.

For further information on MAD Ltd or any of the brands in its portfolio please visit www.markandrewdevelopments.com