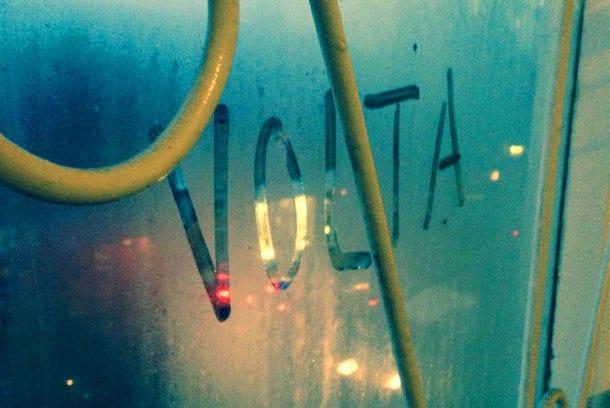 Burton Road in West Didsbury is about to welcome a brand new eatery and bar to the neighbourhood.

Volta aims to offer excellent & ‘well travelled’ food, outstanding drinks, and splendid service, all in the confines of a relaxed, neighbourhood restaurant and bar.

Volta is from the team behind Chorlton’s award-winning bar, Electrik, and is inspired by the owners’ gastronomic adventures around the world as DJs.

As ‘club alchemists’ Luke Cowdrey and Justin Crawford (The Unabombers) have been part of the city’s musical landscape for nearly 20 years. They launched ‘Electric Chair’ in 1995, one of the best loved club nights that the city has ever seen. Their journey has  taken them right across the globe (via Croatia where they hold their own annual festival ‘Electric Elephant’) and right back to Manchester where they founded Electrik Bar in Chorlton in 2009.

Sharing plates and grills will be the order of the day at their new venture, with meticulously sourced ingredients being central to an informal but high quality food offer. Its about down to earth, social, family-style dining and drinking inspired by the European ‘no fuss’ approach to great eating and drinking. Patrons will be as welcome for drinks as they are for food.

Volta is a natural evolution for the team, where food is intended to be much more central. Head Chef Alex Shaw, will be heading up the operation alongside Matt Robinson whose city wide reputation as bar manager is second to none. Alex’s experience includes stints at Michelin starred The Old Vicarage; The Wig and Pen in Sheffield; Nunsmere Hall and as Head Pastry Chef for the Sponsors Village and Royal Box at the 2002 Commonwealth Games in Manchester.

Like everything that the Electrik team have established, a sense of community is central to the vision for Volta. It will be a high quality but down to earth, neighbourhood retreat for anyone who enjoys fine food and drink – just come as you are.

Volta is set to open early December when further imagery and menus will be available.