Manchester’s not short of street art. But have you ever wondered which were its most popular pieces?

A recent study by Transpennine Express showed that we have the most Instagrammed street art in the country, with Sheffield coming in at a close second.

As a hub for creativity, it’s no surprise Manchester is a leader on the UK street art scene. Many pieces here have been created by out-of-towners with worldwide reputations. Some, however, are the work of local artists.

Regardless of their origin story, all are beautiful, deep and meaningful in their own ways.

Read on to discover which pieces made the top of the list and where to find them now.

Jim Vision, also known as Jim Rockwell, or Probs, is a British graffiti artist and muralist based in Shoreditch. His creation ‘The Tyger’ – or ‘Tyger Tyger Burning Bright’ – replaced his previous mural for Netflix show Our Planet on this wall in June.

The two tigers face off against one another in the forest of the night. Above, the trees appear to be aflame.

The piece features an excerpt from William Blake’s Tyger Tyger poem, which reads: ‘Tyger Tyger burning bright / In the forests of the night… / In what distant deeps or skies / Burnt the fire of thine eyes.’

In Blake’s poem, these ‘tygers’ are symbolic and represent the fierce force in the human soul. Vision incorporates much of this symbolism into his own piece, drawing from Blake’s own personal philosophy regarding individuals’ spiritual and intellectual revolution. The mural has now been painted over. 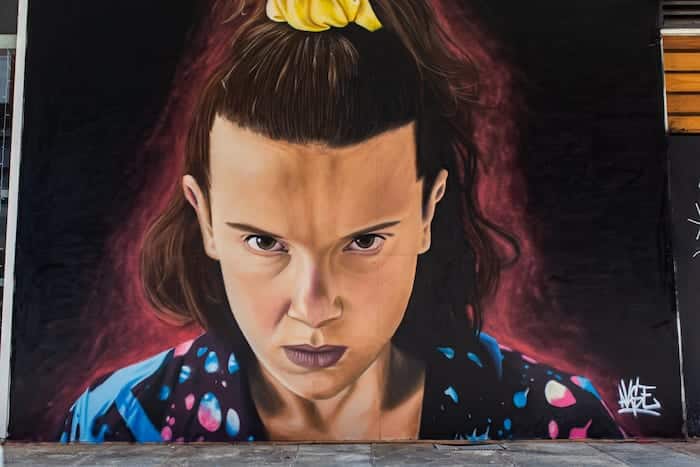 Due to the nature of street art, only one of these pieces remains, despite all three having been painted in recent months.

The artist behind them, known as Akse P19, is responsible for some of the most famous street art in Manchester.

His giant mural of Stranger Things’ protagonist Eleven appeared outside Chinese restaurant Sweet Mandarin at the beginning of July to mark the release of season three of the Netflix hit.

Grimshaw’s ‘Two Worlds’ piece was created as part of the Cities of Hope festival, held here in 2016. The festival saw nine of the world’s most renowned street artists come to our city to stand in solidarity with the oppressed, create new landmarks and redirect conversations around poverty, injustice, and exploitation.

Grimshaw’s theme was that of globalisation, and he has focused in particular on its effect on indigenous peoples.

His use of gold references the goldmine in West Papua (the biggest in the world), which is co-owned by a US company. Whilst it has brought untold wealth to owners, for local communities the £100bn mine has only furthered poverty and oppression.

Painted over three days in November 2011 by Sheffield-based artist Faunagraphic, this magnificent mural was created in collaboration with partner Rocket01 and with a little help from Manchester graffiti artist Ruse.

A commission for American footwear brand Converse, look closely and you can still spot the brand’s logo in the bottom right corner today.

This Amy Winehouse painting by an unknown artist has caught the attention of many passers-by on Deansgate.

Entitled ‘Silence is Golden’, his piece references haloed saints and other religious iconography in stained glass whilst at the heart sits an introspective male muse painted in a contemporary style.

For true Mancunians, this piece should not really need any explaining.

The worker bee has long been a Mancunian icon, starting with the industrial revolution and continuing through to the present day. Following the attack at the Arena in 2017, however, the humble bee was adopted anew across Manchester as a symbol of solidarity and togetherness.

The Manchester Evening News commissioned local artist Qubek to paint this mural of 22 bees in the Northern Quarter to commemorate the 22 souls that lost their lives that terrible night, after his original Stevenson Square piece showing a bee within two hands cupped in a heart shape went viral in the days following the attack.

10 Birds is the work of renowned Brazilian artist Mateus Bailon, also responsible for the famous ‘Guardian of Ancoats’ bird which once sat on the former Great Ancoats Street electricity substation (now demolished to make room for flats).

You can find more of his brightly coloured, nature-inspired work in West Didsbury.