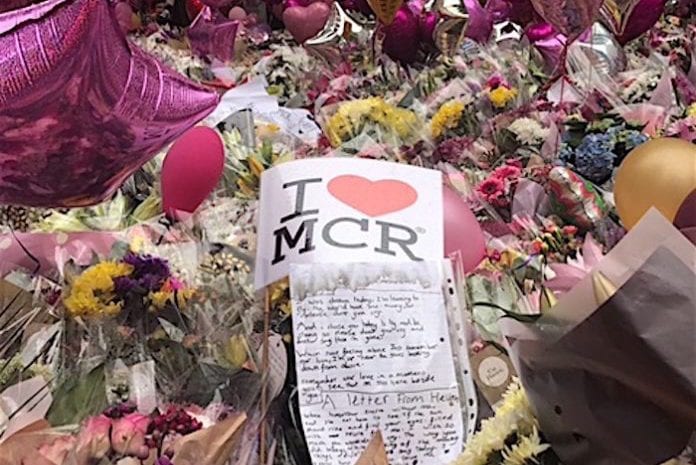 More details about the commemorative programme for the anniversary of the Arena terror attack have been announced.

The Tree of Hope Trail, which will run from Saturday 19 May to Sunday 27 May inclusive, will be the focus for people who want to share messages of tribute, solidarity and love.

28 Japanese maple trees will stretch along a route from Victoria Station to St Ann’s Square, to which members of the public can attach messages.

Specially-designed cardboard tags can be obtained from volunteers who will be overseeing the trees every day from 8am to 8pm – 8am to 11pm on Tuesday 22 May itself.

At the end of the Trees of Hope event, every message will be preserved and kept in an archive of the city’s response to the attack alongside tributes left last year. The trees will remain in the city centre.

Any other tributes which are left in public spaces will be removed at the end of each day and taken to Wythenshawe Park, where they will remain on display.

Any floral and plant tributes will be recycled once they have reached the end of their lifespans or replanted elsewhere.

“It promises to be a moving and memorable sight which will help people to reflect on last year’s events,” said Manchester city council leader, Sir Richard Leese.

“We know that the anniversary will be an incredibly difficult time for many people, especially those who lost loved ones or were badly injured. Yet we saw last year in countless good deeds, instances of compassion and refusal to give in to hatred that the worst of times can bring out the best in people. That is the hope that the Trees of Hope trail will symbolise.”

Other events include a civic cathedral service and national one minute silence at 2.30pm on 22 May, and There Is A Light, a lyric and song projection in St Ann’s Square from 22-26 May.

Around 4,000 people representing more than 80 choirs have applied to take part in the Manchester Together – With One Voice community singing event in Albert Square on the evening of Tuesday, 22 May. This will take place from 7.30pm to 9pm and culminate in community singing for the final half hour.

The event will see people come together in the same spirit of solidarity and compassion which Manchester, Greater Manchester and beyond showed in the aftermath of last year’s attack – and in which music played an important part.

The choirs will be led by Dan McDwyer, the choir master who directed Parrs Wood High School in Didsbury whose moving tribute to the 22 people who lost their lives in the attack went viral last May.

“Music to aid healing is proven and is even more impactful when people come together in numbers,” said Mr McDwyer. “To harness the power of communities in one voice will be a special moment that I am honoured to be asked to conduct and to be a part of.”

Members of the public are encouraged to come along to share in the moment and add their voices to the singing, which will be broadcast live on BBC Radio Manchester and Key 103.

It will also be shown live on the big screen in the Piazza at MediaCityUK and played over the PA systems at Manchester Airport as Greater Manchester comes together.

“There was a remarkable response to last year’s terrible events as people united to show their strength, solidarity and refusal to give in to hatred,” said Sir Richard Leese.

“Once again thousands will join together with one voice, marking an emotional anniversary in a fitting way. The overwhelming interest in taking part in this event shows once more the extent to which this is a place with music in its soul.”