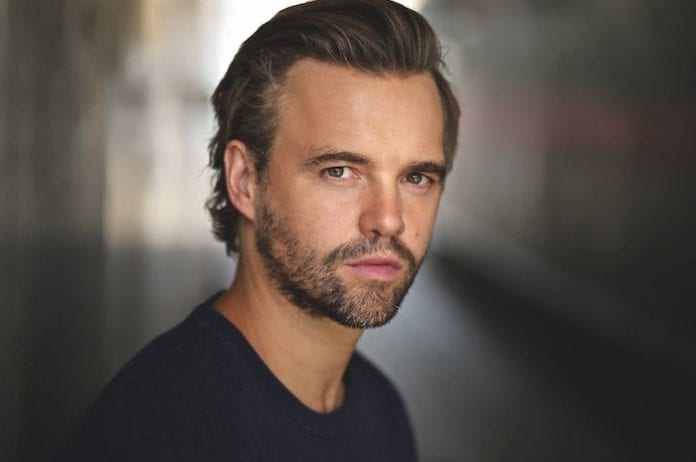 You may remember actor Rupert Hill from Coronation Street where he played Jamie Baldwin. Since leaving the show in 2008, he has appeared in many stage productions including The Full Monty, When Harry Met Sally and Once Upon a Time In Wigan.

And as if that’s not enough, he is also co-owner of The Rivals, the restaurant and bar which opened in the Royal Exchange Theatre last year, and Northern Quarter pubs Gulliver’s and the Castle Hotel.

He is returning to the stage to directing the show he once featured in, The Full Monty, which tours the UK from September.

You have starred in The Full Monty on tour. What made you want to direct it?

I’ve directed a few short films and a low budget feature called Leatherbird. The Full Monty producer David Pugh saw these films and liked them and asked if I’d be interested in directing. So here I am.

When you’re directing the touring show, do you travel with it?

Yes, most weeks I’ll be travelling to the new venue to get the show in and make sure everyone is behaving themselves!

This is the third tour now and the show is really successful each time it goes on the road. Why do you think it appeals to audiences?

First and foremost it’s a fantastic touching and funny script. And the one aspect of the theatrical version that betters the film in my opinion is that the audience become part of the play at the end. And they go nuts!

Stage, TV and film – you have done them all, but do you prefer one over the other?

The sad fact is that most actors spend most of their careers out of work. It’s incredibly frustrating but it’s a necessary evil because it’s such an overpopulated industry. To survive you have to truly love it and be willing to struggle. So I am extremely thankful for any work I get and try and see the positives in whatever I’m doing. Theatre has an obvious advantage because you get that immediate response from the audience but it’s all good stuff when you’re trying to pay the rent.

You co-own The Rivals with Goska Langrish and Anna Fysh and you are all hands on. How has the first six months gone?

It’s been a labour of love and we couldn’t be happier. It’s a massive operation but It’s been running extremely well. We are overjoyed.

In many towns, pre-theatre meals are often seen as a ‘dirty word’, as the food is rushed out, eaten quickly and then forgotten. How does The Rivals differ?

Our head chef and business partner Anna Fysh cleverly designs our menus to be both delicious but also quick to deliver. She has also put together a brilliant team of chefs. Time constraints aren’t ideal but feedback from customers has been overwhelmingly positive so far.

You are a dad of two, you act, direct and co-own many pubs/restaurants. How do you manage to do all of this without flagging?

I honestly thrive on it. I’ve always detested doing nothing. It’s only a real downer when I don’t get to see my girls for long periods of time but, other than that, I’m just grateful to be working in two such interesting industries.

You moved to Manchester for Coronation Street and you stayed. What do you love about the city after all these years?

As soon as I arrived it felt like home. And it’s a town where things can happen. I came here to be in Corrie which was amazing. I then made a band, opened six pubs/bars and started making my own films with the Manchester Independent Collective (micfilms.co.uk). Those sorts of opportunities are rare. I love it here.

Which are your favourite places to hang out in Manchester and why?

Just performed at Hope Mill Theatre which just won a best fringe theatre award. It’s an incredible place. Love Temple/Big Hands too but I probably give most of my money to HOME as they show the films I want to see.

How has the city changed since you moved here 10 years ago?

It’s nuts. When we opened The Castle Hotel in 2008, 75% of the current Northern Quarter bars and restaurants didn’t exist. I can’t believe we are still going strong!!! It’s much more multicultural now too, which is a big plus for me.

The Full Monty tours the UK from 6 September 2018.