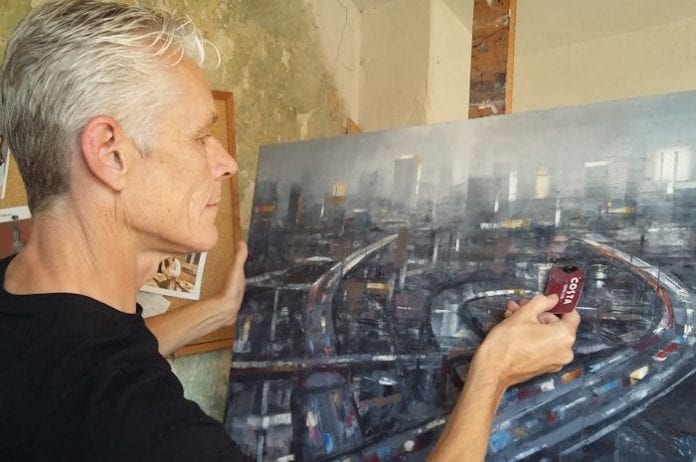 When you think of what you could use an expired Costa loyalty card for, painting with it is probably not one of the first things that springs to mind.

Artist Steven Bewsher was painting some demolition scenes when he became frustrated that his palette knife’s blade wasn’t long enough to create the effect he wanted.

“Searching through my bag for an alternative, I happened upon an expired Costa card and, to my surprise, it did the trick, helping me to apply and move around the thick, angular layers of paint that I like to work with,” says Steven.

He tried out a variety of loyalty cards, including Cafe Nero and Starbucks, but they weren’t quite the same: “This one’s slightly thinner and more bendy than the others.”

At first, he started using it to draw black lines with the edge dipped in paint. Then it progressed to him using it as a paint applicator.

“The card gives a certain shape, like a rectangular block of paint but I also like the effect it gives when I mix the colours with it because I get this smear that I can take to the canvas.”

Steven, who has been painting for over 35 years, says he has learnt to manipulate the tool a lot better in time and it’s now, in fact, the only thing he uses to paint at the moment.

“I’ve got about 60 brushes sat here in tins that I’ve not used for nearly five years. I might get back to them sometime down the line but I don’t know.”

“I like painters who put a lot of paint on and move it around. You can make a great painting by destroying the paint. You get to a stage where you take a risk and you either lose it or you get a better painting out of it.”

His latest exhibition, Ardwick Still Life, has been inspired by the duality of demolition and construction in the city, something that fascinates him.

“I’m inspired by this sort of inescapable fact that everything is eventually decaying. As soon as a brand new building goes up, it’s already starting to deteriorate.”

The story behind the name of the exhibition is as quirky as his painting tool of choice.

“I was on my way back from Gorton photographing the demolition of the ICL building when I came across this burst shopping bag in Ardwick.

“The shopping was on the pavement and I initially walked past it but then I thought, no that’s what I want to paint because there’s something in there that’s really true. So I basically painted that and it just formed this lovely composition and it did look like still life on the pavement.”

The show starts with quite traditional style paintings of Manchester streets, then it gradually changes to what Steven calls a “visual assault”, with paintings portraying the city as a chaotic place.

“You can see signs, and clothing and you catch glimpse of people’s faces and shoes, the trams and so on. I no longer saw the city as one scene, I started combining more images into one painting to try and get across this movement, chaos and constant change.”

In the twenty years he has been dealing with galleries and art dealers, Steven says he has never met anyone like Martin Reagan, founder of the Gateway Gallery in Hale, who has had a massive impact on his career.

“Martin was the first gallery dealer about whom I thought ‘Oh wow, this guy knows his stuff,’” he remembers.

“Initially he was quite rude to me in a way”, he jokes. “I knew him for about a year and he used to say I don’t deal with living artists. And I thought, well that’s a bit tricky because I’m here and he was still here.”

Martin eventually came around, but more than that, he was the first person to talk to Steve about developing his career as an artist.

“Previously, I’ve taken work to galleries and I sold paintings but they were just sort of going in and out unnoticed and there was never any talk about developing your career. He was also very critical which was a bit unusual amongst gallery owners because they’re usually very complimentary. But people called him the Marmite Man and I thought he was great that way.”