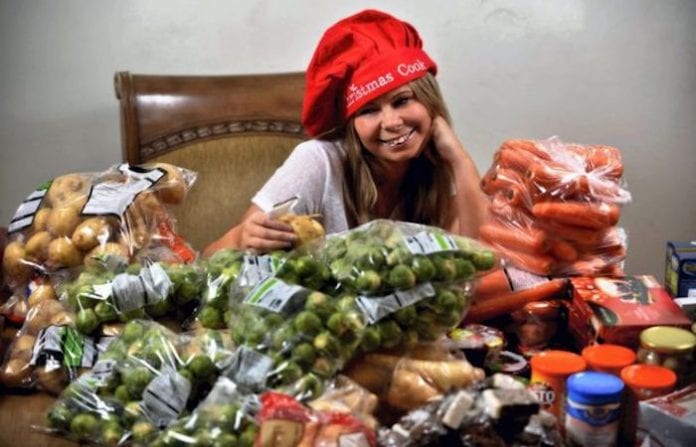 Preparing Christmas dinner with all the trimmings is always a bit of an undertaking.

If you’ve been landed with the task of feeding the family the yuletide feast this year, you’ll be forgiven for feeling the pressure.

Spare a thought then for Natalie Lek of Swinton who is aiming to feed no less than 1000 mouths as part of her project, The Community Christmas Dinner.

The 38-year-old part-time law student and mum-of-two may already have a lot on her plate, but that doesn’t stop her taking the time to fill those of others in need.

It all started when Natalie found herself at a loose end one Christmas, and decided to reach out to her social circles online.

“Five years ago, I put a post on Facebook saying ‘If you can’t afford a Christmas dinner il make you one for free,'” she explains.

“I was expecting maybe 12 people to show up and I ended up with 70 straight away. Since then it’s just snowballed, and now we are aiming for 1000.”

Natalie is keen to emphasise that nobody is under any obligation to justify why they should receive one of her dinners.

“There are no criteria, and there are no tick-boxes. It is for anyone who might for whatever reason feel isolated, vulnerable, on their own or at a loose end this Christmas.”

For the first couple of years, the initiative was funded entirely by Natalie out of her own pocket – until she was given a ‘roasting’ from a friend, who suggested she should open it up to receive donations.

She now has a team of dedicated volunteers, armed with the task of delivering the ‘red-hot, ready to eat’ dinners.

But there is one area that Natalie is particularly keen for help with this year.

“At the moment I am really struggling with turkeys. I can’t get any of the supermarkets to donate them as they are a high value item.

“With turkeys taken care of, I can make the rest of the money count for food parcels and make everything else go that bit further.”

To find out more, get involved, or donate to Natalie’s Community Christmas Dinner, visit thecommunitychristmasdinner.org.uk