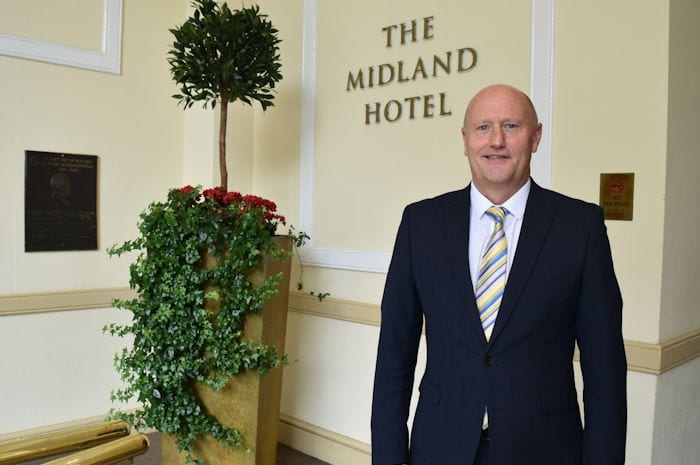 One of Manchester’s best known hotels has a new general manager.

Simon Farr has taken charge of the iconic four-star Midland just ahead of the biggest set-piece event of the year – the Conservative Party conference. The Edwardian 312 bed-hotel on Peter Street will be one of the key party headquarters.

Simon, who will be responsible for a team of 250 at The Midland, brings a wealth of experience to his new role, having served as operations director for Guoman and Thistle Hotels, responsible for 5,000 bedrooms in central London at the Cumberland, Tower, Royal Horseguards and Grosvenor hotels.

He was also operations director Malaysia for Thistle Hotels for three years, taking on important projects in Kuala Lumpur and Singapore.

Simon launched his career into major city hotels as manager of the 1,400-bedroom Regent Palace Hotel in London. But his first excursion into the hospitality industry began on a match smaller scale. 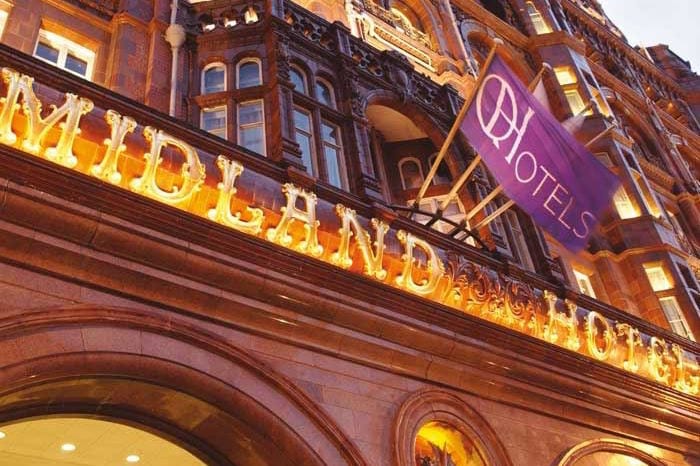 “It all started at the age of 14 when I got a job in a restaurant working for a Portuguese man and his wife,” says Simon, who was brought up in Newark-on-Trent, Nottinghamshire.

“It got really serious when I was 17 and went on a graduate management programme with Anchor Hotels.”

The appointment by QHotels comes as the grande dame of the Manchester hotel scene -‘host to Kings, Queens, Presidents, Prime Ministers and rock stars’ – continues to invest in upgrading its facilities to cater for the changing tastes of guests.

The bar and lounge area has recently undergone a £400,000 revamp, following the launch of the Tea Room at The Midland in April this year, a new dedicated space for a decadent afternoon tea experience.

The Midland’s flagship restaurant, Adam Reid at the French, was recently placed 17th in the UK by the 2018 edition of the Good Food Guide – the only Manchester representative in the top 50.

“I am really looking forward to the task ahead,” Simon told us. “There is a lot to do including the official launch of the brand new lounge and bar area and meeting space underneath the atrium to the left of the lobby. The carpets have only just gone down.

“We are waiting for the end of the Conservative Party conference before we take it to market. Meanwhile we are absolutely ready for the conference; more ready, perhaps than for other conferences I have been involved with, including, in the past, Labour in Brighton.

“The Midland Hotel is an instantly recognisable landmark in Manchester and has been the city’s most prestigious hotel since it opened in 1903. It’s an iconic hotel and I want to take it to another place while continuing as the number one hotel in Manchester.

“At the Midland I want to ensure that service levels match the expectations of future customers, which are changing all the time and to a great degree. People expect value for money and want the best service in that value.

“To become the latest general manager of this fabulous establishment is a real honour. I’m looking forward to ensuring that it continues to evolve to offer the highest levels of service and that for all of our guests a visit to The Midland remains a real experience.”

“Simon is someone who is inspired by people, both guests and colleagues, which made him the natural choice for this role,” says QHotels managing director Michael Purtill.

“His experience means he understands the essence of good service and the need to be constantly vigilant in order to respond to new markets and the changing needs of our customers. We look forward to him leading the fantastic team we have at The Midland and ensuring the hotel remains at the forefront of the hotel scene in Manchester.”

Read More »
September 28, 2020
PrevHave you read?This national treasure on your doorstep gives a fascinating insight into Manchester’s history
Next read...Treat yourself to a little TLC at the sumptuous Macdonald Manchester Hotel spaNext