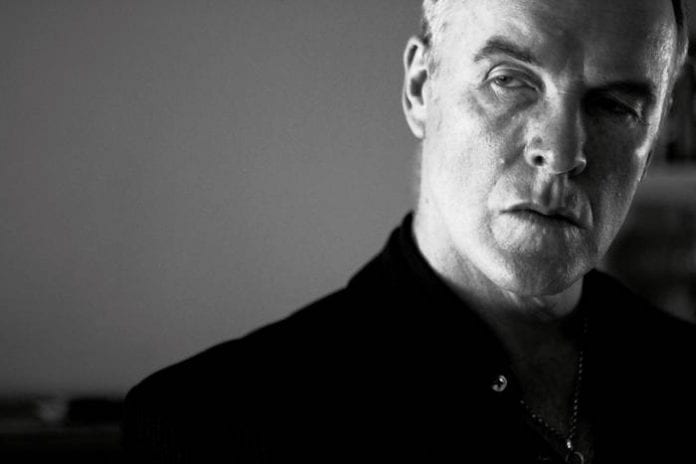 The bench, the bench by the war memorial, an eight foot, graffiti tattooed Cleopatra’s Needle of a war memorial. She is about to sit when she notices the liquid on the seat; rain? Possibly. Piss? Again, possibly.

This is the introduction to The Bench, the latest Manchester-inspired novel from local writer, actor and director Joe O’Byrne.

He sees stories where we didn’t think they existed. Born and raised in Bolton, he’s a lover of hats and a wielder of words –  bringing together Northern grit with lived experience.

From working behind the bar in one of Bolton’s toughest neighbourhoods to holding a hit slot on Salford City Radio and putting on a packed-out play The Haunting of Blaine Manor at The Kings Arms last year, it seems that there’s nothing creative he can’t put his hand to.

O’Byrne is the mind behind the fictional northern England council estate of Paradise Heights, inspired by his time both writing and teaching in the city.

He is also a part time Community Payback Officer working for The National Probation Service where he meets people from all walks of life.

Once awarded the title of Mr Manchester, O’Byrne doesn’t shy away from uncovering the more secretive sides of the city. His work is gripping, gritty and often comes with a shock. If you’re a fan of films like Taxi Driver and Goodfellas, this is your man.

Originally a play, written and directed by O’Byrne himself, The Bench is O’Byrne’s first venture into novel writing. It brings together a range of people – a club doorman, a thief, a fake medium, a homeless man, a council road sweeper, two war veteran pensioners, a scarred shoplifter, a widow, a drug dealer, a loan shark… and many more.

He’s also dabbled in performance poetry, songwriting, photography and has recently started selling his artwork too.

Tell us a little more about yourself Mr Joe O’Byrne

Now as an Irish Catholic child right from the off you are doomed to Hell – just for being born – ‘born from ﬁlth!’ as I remember one priest spluttering at us, telling us that we had to spend our lives repenting in the faint hope of avoiding hell.

Now that’s kind of a lot for any ﬁve year old to take in, but it was interesting mixing Tom and Jerry cartoons with Hell, I remember some of my childish drawings had Tom and Jerry trying to get out of Hell.

I’m glad that priest made his mark that way though – let’s face it, it could have been worse.  He was a scary priest but I kinda liked him, wondered what made him that way and I suppose that’s where my love of bad guys was born.

Along with the myriad of bad guys I watched in black and white ﬁlms, I was a huge fan of James Cagney, Humphrey Bogart, Lee Marvin, Bette Davis, Lana Turner,  Veronica Lake and a cast of thousands – and I have my Dad to thank for that. Those kind of ﬁlms were always on TV – and the stories – just wow! I loved them, the villains, the good guys, the femme fatales, great stock for a young dreamer.

After various time wasting jobs but lots of life experiences, I hit the fabulous undiscovered county of retail.  In the middle of this career I spent 18 months as Bolton’s youngest landlord, in a rough house – The Sunnyside Hotel, a working class community pub. Full of life and rich character, ugly and beautiful and beautifully ugly.  This experience planted seeds for my later writing.

What drove you towards writing and acting?

It came from a very bad time to be honest, the breakup of the family, the split.  I kind of withdrew a bit, this is where I really started writing.  I started trying to write a novel called Paradise Heights, set in a community that was anything but Paradise. Much more a modern, urban, a grey concrete Miltonesque Paradise Lost.

That book is still half written, but it gave me the foundations for what would later become the series of plays, ﬁlms, poetry and novels known as Tales from Paradise Heights and then I turned my life upside down, left retail and that life behind.  Everyone thought I’d lost the plot, I felt I’d ﬁnally found it.  I decided I wanted to act, took a Media and Performance degree at Salford University and holy shit, I was reborn.

You’ve been called the Scorsese of Salford. Why do you think this is?

It’s unbelievably ﬂattering to get that comparison.  But I’m not gonna give you an ‘aw shucks’ answer.  I think it’s because our backgrounds are very similar.  Certainly from a childhood Catholic point of view and extending into how we are fascinated by life’s rich characters both bad and good. We both love the community we grew up in, sense that thriving community, feel it in our bones, and we both recognise that actions lead to consequences that can effect an entire community.

As for the Salford part of that moniker?  I really fell in love with Salford when I went to uni there, and it’s really where Paradise Heights was ﬁnally born. So much of Salford inﬂuenced that writing, along with Hulme and parts of Bolton. Paradise Heights is an amalgamation of those three, a beautiful and terrible unholy trinity in a sea of grey.  Plus the fact that all of the Paradise Heights plays and ﬁlms premiered in Salford barring the feature ﬁlm Lookin’ for Lucky which premiered at the AMC Manchester – a cinema now sadly gone.

The fabulous Kings Arms in Bloom Street,  Studio Salford operating from out of that creative hub and the characters that patronise it – big characters – and The Lowry have all been very kind to me.

So yeah, I love Scorsese. The man’s a genius and just to have my name in the same sentence tells me how far I have come, but I only have to look at him to see how far I still have to go.

What are your creative inﬂuences?

Stephen King (his work gave me the idea to link all my stories, through community, character or history), Jim Cartwright (Jim tried to get one of my scripts made for TV along time ago and his wife was my writing agent, but that’s another very long story), Jimmy McGovern, Ken Loach, Allan Clarke, Penny Woolcock, Shelagh Delaney, Wim Wenders, Clint Eastwood. There are loads, and I mean loads, I could write far more than a paragraph on every one of these genius story tellers but you don’t have the room.  So much great and classic work around and to learn from.

Was The Bench inspired by a particular bench?

I work weekends for the probation service as a Community Service Ofﬁcer, this involves me going out supervising offenders on various projects in the community. I had been working with a group of guys for sometime in a church graveyard, landscaping and generally keeping the grass down and the ﬂower beds tidy.  One week we installed a bench in the graveyard, and during lunch I had sat on it, looking out across the gravestones and I wondered how many people would sit here?  What would they talk about?  What would be going on in their lives?

Boom. Inspiration. I’d been looking for a while for a device I could use to introduce more characters to Paradise Heights. This was perfect.  We’d see a brief snatch of them and their lives here and they would be revisited in their own satellite tales.   I started writing and the scenes developed into a plot and twelve scenes became a year, a month per scene sat on a bench in a municipal park but with a plot that stuck with you. There’s a lot you can do with a park bench.

How does Paradise Heights have parallels with modern day Manchester?

The people. The passion. The puddles. The pills.  The pain.  The triumph.  The love. The loss.  All of that happens every day on the streets of Manchester.

From the horrors of Spice Lane at the back of Piccadilly and the growing community of the homeless, to the fabulous eclectic mix of The Village, to the two towering football teams, the cultural Northern Quarter, the university, the corruption, the council estates – it’s a rich fabric, a tapestry of tales and that’s what Tales from Paradise Heights is.  Fully loaded and embracing the horrors and the heights.

For more about Joe O’Byrne click here. To help him take his theatre show from Salford to London click here.