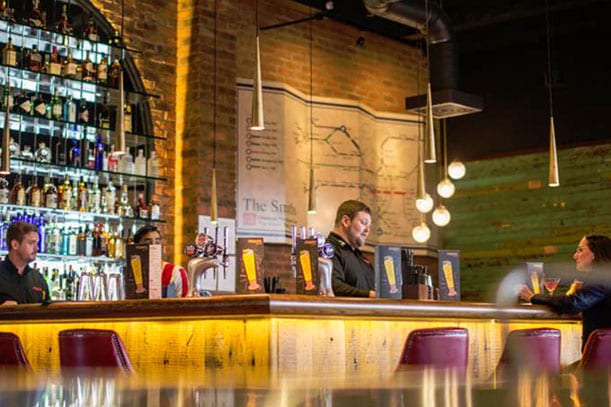 TGI Fridays opens its doors to a new era of ‘fast track’ restaurants, the first of which is opening at Manchester Piccadilly Station.

The opening of TGI Fridays Manchester Piccadilly marks the first of its kind in the UK, providing a convenient on-the-go dining location for locals and commuters.

Located within the Upper Concourse of the station, the restaurant is equipped with technology for commuters including power sockets, USB charging sockets, Wi-Fi and individual seating options. Able to serve 135 diners at any one time, the interior has a rustic colour scheme and memorabilia inspired by travel, local artists from Manchester, with a particular nod to the most famous train station in the world – Grand Central Station.

An open-plan kitchen will offer guests a glimpse of Fridays’ food as it’s being cooked, including the new handcrafted burger range and classic American-inspired breakfasts with a Fridays twist -including waffles, maple bacon and Jack Daniel’s-candied sausages. The food has been created to meet the demands of the busy commuter, ensuring that all main meals can be served to guests quickly.

Jane Sadler, General Manager for TGI Fridays Manchester Piccadilly said “It’s a great pleasure to be opening the first of Fridays’ ‘fast track’ restaurants, and it couldn’t be a more perfect location than in one of the busiest railway stations in the country. We’re really looking forward to what is expected to be a busy opening period and can’t wait for our guests to get a flavour for the fast track restaurant.”