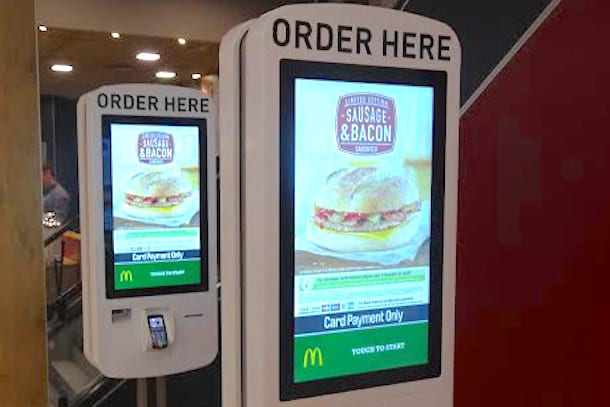 A new McDonald’s opened in Piccadilly Gardens last Wednesday. Nothing remarkable about that, you may say, especially with so many new places to eat opening every week. But this McDonald’s isn’t your ordinary Maccy D’s, writes Stephen Lewis.

The new McDonald’s in Piccadilly Gardens features digital menu boards, tablet computers on some tables and the option to use either the traditional till services or self-order kiosks where you can browse the entire menu on touch screens, place your order, pay by card or contactless, then go straight to a designated area of the counter to pick up your order.

Touch-screen ordering at McDonald’s has actually been around for a while but it’s being rolled out across the country and has finally arrived in Manchester city centre.

It won’t make any difference to me. It’s quite a while since I ate in a McDonald’s. Such a long time, in fact, that the last time I ate there, Ronald McDonald was just a lad. It’s not just a McDonald’s thing. I’ve never eaten at a Burger King.

It’s not because I don’t like burgers. I like a good burger as much as the next man or woman. It’s just that I try to eat healthily, so I don’t eat them very often. When I do, I prefer to pay a bit more for something a bit more, well, gourmet. Filthy Cow, for example, where a burger costs double a Big Mac but tastes 10 times better, in my humble opinion.

Another reason I don’t go there is choice. If I want a quick, cheap meal, I can choose from burritos, falafel, a pizza slice, sushi, noodles and lots more. Back in 1983 when McDonald’s arrived in Manchester, the competition was hardly fierce – the chippy and Wimpy, compared to which McDonald’s seemed positively glamorous.

As for automated self-service, I’m happy to serve myself in certain situations. ATMs are great, and I don’t mind using a machine to buy my tram ticket.

But when it comes to shopping, call me old fashioned, but, given the choice, I would rather be served by a person than a machine. Supermarket check-out staff never break down, at least not in public, and are less likely to be out of order than a self-service checkout. (The only out of order check-out staff I ever encounter are those who spend ages chatting to the customer in front of me who happens to be their next door neighbour).

And check-out staff never say those five words we all dread – ‘unexpected item in bagging area’.

Eventually I gave in. Now I use them if it means I don’t have to queue at an ordinary checkout. That’s what self-service should be all about. Avoiding queues.

It looks like self-service is here to stay and it can’t be long before other restaurants follow suit. If I ever find myself in a McDonald’s, which is unlikely but not impossible, I’ll take the self-service option, but only if there’s a queue to be served at the counter. But God help them if I ever find an unexpected gherkin in my burger area.