Too Many Critics Comes To The North At Damson Media City 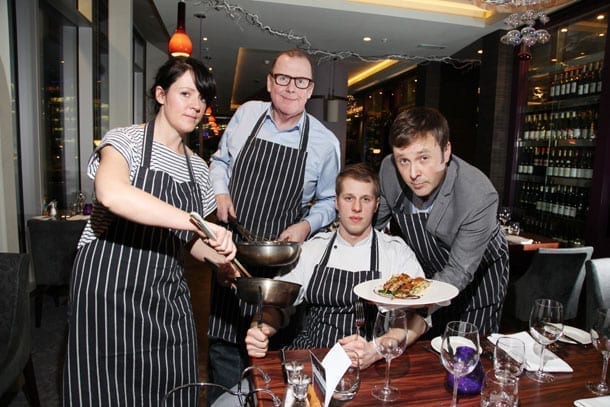 After years of turning the tables on the critics in the capital, humanitarian organisation Action Against Hunger is now bringing its unique brand of light hearted gastronomic ‘payback’ to Greater Manchester with its annual Too Many Critics event. Greater Manchester is the first region to host the event outside London.

Too Many Critics will be taking place on Monday 17th March at Damson MediaCityUK, and the premise of the event is simple – a team of top food critics will be dropping their pens and picking up the pans as they truly find out what it’s like to be on the other side of the pass! The critics will prepare a meal for a room filled with 140 top chefs and restaurateurs, as they get a rare opportunity to pass judgement on the country’s most influential taste makers, including Lisa Allen (Northcote Manor), Simon Stanley (Damson and The Red Lion), Mary-Ellen McTague (Aumbry) and Robert Owen Brown (formally Mark Addy).

Action Against Hunger spokesperson Emma Cullingford said: “Too Many Critics is a unique opportunity for food critics, food lovers, chefs and industry professionals to come together and take a stand against child hunger. As thousands of families in some of the world’s poorest countries struggle to feed their children, the event could not come at a more significant time.”

The premier Manchester event will unite the leading lights from the Northern food, drink and media scene and is brought to the North’s central media hub MediaCityUK in association with Northern Restaurant and Bar Show (18-19th March at Manchester Central) and the award-winning Damson Restaurant.

Steve Pilling of Damson in MediaCityUK says: “We’re delighted to have won the bid to host this fantastic event. It’s an excellent opportunity to show what we’re made of up North, raise money for a superb cause and, best of all, for all us hospitality professionals to pay back the critics!!”

The evening will include a sit down dinner at Damson for 140 guests as well as a silent and live auction. This year’s host is BBC food and wine presenter Nigel Barden, who will also be conducting the live auction. Both national and regional food critics will be putting their skills to the test, including Bill Knott (The Financial Times), Charles Campion (London Evening Standard), Lucas Hollweg (The Sunday Times), Mark “Gordo” Garner (Manchester Confidential), Andy Cronshaw (Manchester Evening News) and Ruth Allan (Taste of Manchester).

Tickets including a champagne reception and a four-course dinner are now on sale priced at £60 and can be purchased at: endhunger.actionagainsthunger.org.uk/critics