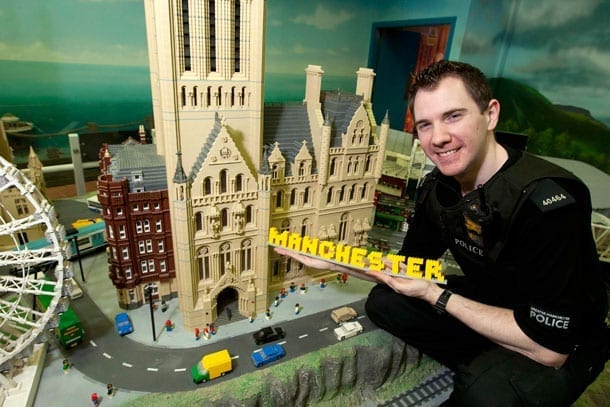 Alex Bidolak was an ordinary guy working in an ordinary job as a postman – until, one day, he was offered the opportunity to become a master model builder at LEGOLAND Discovery Centre in Manchester.

And, just as Emmet from the movie eventually ascends to become very special, destined to defeat an evil criminal in the LEGO world, Alex has also become a The Special, crime-fighting individual himself.

While the 29 year old from Oldham spends his days in the working week creating fantastical models out of LEGO to thrill and delight visitors to the attraction, he spends his evenings and weekends as a real life LEGO hero: fighting crime in communities around Greater Manchester, as a Special Constable for Greater Manchester Police (GMP).

Since becoming a fully warranted officer in June 2013, he has poured over 144 hours of his spare time into volunteering for the Special Constabulary.

Alex regularly patrols in East Manchester, and his career so far has seen him take part in policing for the Conservative Party Conference and the Manchester Skyride, issuing warrants, participating in raids, making arrests and responding to emergency call outs with the fire and ambulance services.

Alex said: “The kids who come to visit LEGOLAND Discovery Centre already think I’m something of a hero, but now I can tell them I’m basically a real life version of Emmet – and they’re going to really love that! I’ve even created a replica of the Piece of Resistence – Emmet’s ultimate weapon against the bad guys – to show them!”

Located in Barton Square at intu Trafford Centre, the LEGOLAND Discovery Centre is made up of a series of interactive features to immerse kids into a world where their imagination can run wild with creative inspiration at every turn.

Featuring a whole host of exciting attractions from the Kingdom Quest ride to the LEGO CITY Forest Pursuit driving adventure ride complete with battery powered off road vehicles, the Centre not only provides fun for LEGO fans young and old, but fantastic educational benefits too.

The Centre involves just one entry fee, with all attractions included in the cost. Tickets are available online from just £8.25 per person.

For more information on GMP’s Special Constabulary and to apply to become a special, visit www.gmp.police.uk for upcoming recruitment events and follow @GMPolice on Twitter.