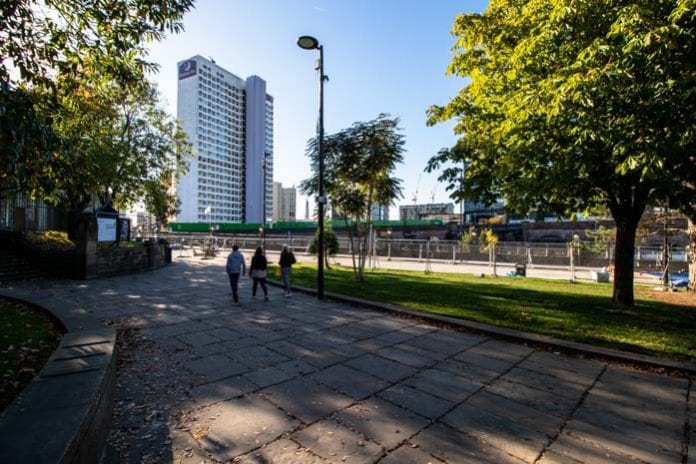 Manchester is on the move.

Hot on the heels of work starting at long last on the landmark Edwardian baroque former London Road Fire station, a planning application has been submitted for the transformation of the oldest part of the city centre.

Manchester-based architects SimpsonHaugh have produced a masterplan for the area around the cathedral and Chetham’s School of Music in a major expansion of the city’s Mediaeval Quarter.

The cathedral and Chetham’s Library, which both date from the early 15th Century, are set to be enveloped amid a willow tree-lined park along the River Irwell – a revival of a vision that first emerged following the IRA’s devastating bomb attack of 1996. 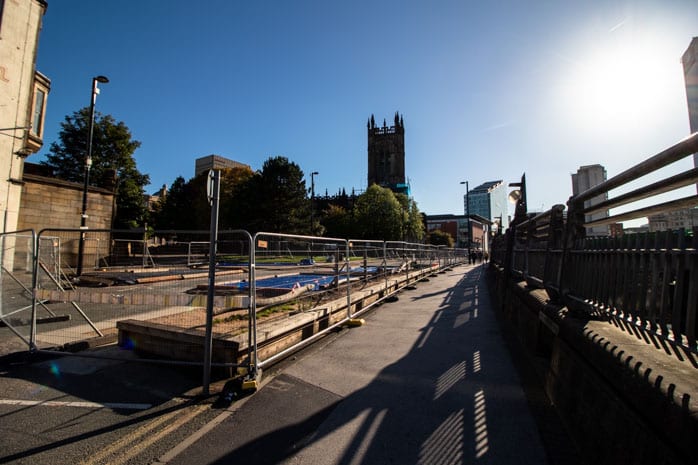 Ian Simpson, partner in SimpsonHaugh, was the driving force behind the original post bomb masterplan that laid out New Cathedral Street and saw the old Shambles pubs – the Wellington and Sinclair’s – dismantled and relocated and rebuilt between the cathedral and the Corn Exchange.

The proposed park near Victoria Station and the Manchester Arena could provide the location for a permanent memorial to the victims of last year’s terror attack on Ariana Grande’s concert.

The planning application also covers the area around Victoria Station, the Corn Exchange, Cathedral Gardens and the National Football Museum. Work is expected to start later this year.

Meanwhile, across the city scaffolding along the London Road and Fairfield Street frontages of the former fire station heralds Allied London’s start on external works on the grade 2 listed building. The developer has been in consultation with Historic England and the city council on the long-awaited scheme.

Allied London, a key player in the massive redevelopment of Spinningfields, St John’s and neighbouring schemes, bought the building in 2015 from the owners of Britannia Hotels.

Opened in 1906, the building was vacated by the fire service in 1986 and by the Coroner’s Court in 1998. Planning applications to convert the building into a hotel were lodged as early as 1986 and again in 1993 and 2001, but never followed through and it suffered major deterioration. 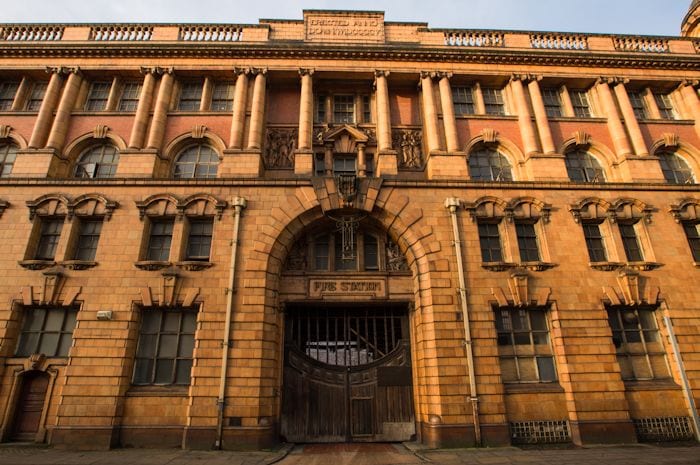 In 2001 it was placed on English Heritage’s Buildings at Risk Register and there followed years of wrangling and a series of proposed conversion schemes, none of which came to fruition.

In 2010 the council sought a compulsory purchase order which was rejected the following year after a public inquiry and considered a second CPO in 2014. Eventually Britannia Hotels put the building on the market for a reputed £10 million in 2015. Conversion work could cost £20 – £30 million

The scaffolding, erected over the last few weeks and not fixed to the building to avoid damaging its ornate terracotta façade, is enabling detailed external inspection of upper levels ahead of essential repair works.

Plans for the site, designed by architect Levitt Bernstein, include a 91-bed hotel, bars, restaurants, apartments, workspace, and 21 live-work units, with new build extensions also part of the proposals. Extensions will take the gross internal floorspace at the building from 144,400 sq ft to 172,100 sq ft.

Allied London’s vision for a new lease of life for the building is that of “one space with a thousand aspects…combining an ambitious reimagining of 21st Century working/living spaces, an international boutique hotel underpinned by carefully curated event, leisure and cultural spaces that bring a new dynamic to the city of Manchester.”