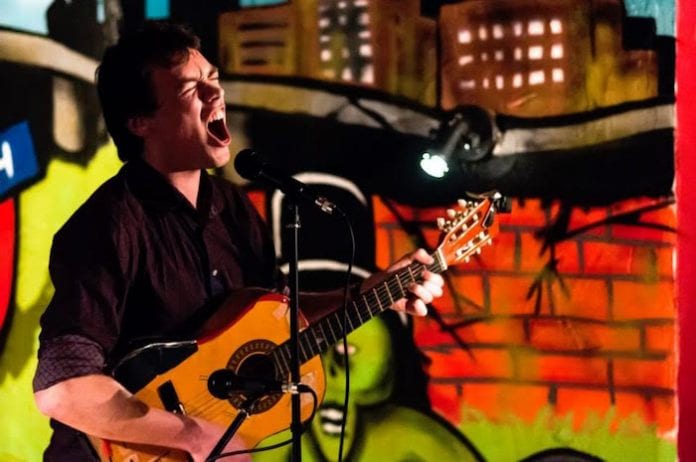 Edy Hurst is a Manchester-based stand-up comedian who started performing comedy whilst he was a student in Leeds and has been performing regularly since moving back to Manchester.

He is one quarter of the quasi-sketch character group Fat Moron (formerly Quippodrome) who have been performing around Manchester for a while and were runners-up in City Life’s 2016 Comedy Awards.

Much of the material he performed and tried out at those nights has been translated into a solo act for his new act Theme Show! which comes to Manchester for the first time next month.

When did you decide you wanted to get into comedy?

I knew from the moment I was out of the womb, straight off the bat it was time for jokes. I used to make people laugh when I was at school, most of the time on purpose. I remember hearing that there were people that did that for a living and thought ‘oh well, that’s perfect!’

How did you get started?

At school I did a lot of performance stuff, school plays and that, where I was nearly always given the comic relief role. Or I always tried to make it the comic relief role, making for a very strange production of Sweeney Todd. After that, I really started performing stand-up comedy at University in Leeds, and after winning the Tickle Pig competition in 2013 started performing with more regularity.

Do you write all your own material?

Do you have a day job?

I used to work in finance. I studied Fine Art at university and I think they misheard me when they asked what my degree was in. I now work in marketing because I am living the trajectory of every Fine Art graduate.

Who are your favourite comedians past and present?

I love comedians who are a little different and generally high energy. The guys who I’m crazy for right now include Tony Law, Maria Bamford, Lou Sanders, Sam Simmons, Trygve Wakenshaw and Reggie Watts. There’s definitely people I’ve left off there, so all the famous successful comedians reading this interview to hear my sweet expert opinions please don’t be angry at me.

I think I generally gravitate towards acts who do something a little different, as I find it more interesting to be introduced something new either as an idea or a style. But mostly it’s just being daft and silly I’m a fan of.

Not sure if I have a definite favourite, I think I tend to gravitate towards pieces and attitudes rather than a single joke. Emo Philips is a brilliant joke writer but I think my favourite of his is when he spends 10 minutes putting a trombone together in his set to just put it away again, and make no mention of it. Or when he shares his tribute to Elvis by saying “Thanks Elvis!”

How would you assess the alternative comedy scene in Manchester at the moment?

I think that the scene is in a really interesting place at the moment. Alternative comedy nights like The Delightful Sausage, Sham Bodie and loads more offer something really anarchic and different for Mancunian comedy fans.

Alongside this there are some of the very best comedy clubs and nights in the country here, giving a really broad church of comedy. With so much, it’s no surprise there’s such a diverse and comedy savvy crowd in the city, allowing the more off the wall nights to find their audience.

Tell us about Theme Show!

Theme Show! is an interactive show in which I attempt to convince a planning committee – the audience – to allow me to build the world’s greatest theme park. I debuted the show at the Great Yorkshire Fringe last July but the upcoming Manchester show will see me upping my game even more to guarantee definite, absolutely happening, hip hooray, yes alright-y, success for my theme park.

What can people expect?

The show is quite high energy and fast paced and I’m doing the very best with what I’ve got. I’ve built a ride for a live demonstration, will put on a fireworks display and have a high quality very expensive advert that I feel will really help me to seal the deal.

What materials have you used to construct it?

Now that would be giving the game away. I have to reserve the element of surprise if my pitch is to be a success. Let’s just say that if you have a vivid imagination, and are also a big fan of pound shops, then you are in for a treat.

I did try to use indoor fireworks but the paperwork was ridiculous and insurance seemed to get very uppity about it. Despite the plethora of pound shop purchases, don’t think for an instant this show was done on the cheap. I had a proper video done by a marketing company and everything.

How did that go?

Well, I told them that I wanted to build a theme park and they asked where, and I said ‘great question.’ They seem like a nice bunch, they’re the sort of guys that would have a slide in their office. So naturally I gave them the majority of my money for the show. I’m yet to see the video, so I guess we’ll watch it together at The Castle.

Finally, can you sum up your ideal theme park in one sentence?

Big, shiny, mostly covered in plastic, and crammed into the form of an hour long comedy show.

Get your tickets for Theme Show! here.