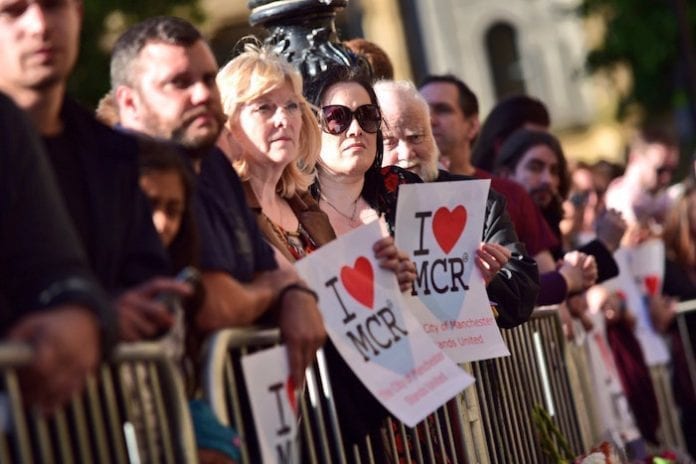 The Guardian news reporter Ben Quinn posts about ‘the music city’s reaction to the arena bombing’ and how it has been ’emotional and intimate – and Mancunians wouldn’t have it any other way.’

In a community still reeling from the sudden and violent loss of 22 lives on Monday night, St Ann’s Square is lined with ‘thousands of personal memorials – often with the hint of a certain defiance – by the citizens of this most creative of British cities.’

To that, add the thousands of acts of kindness, starting with those who reacted in the immediate aftermath of the suicide bombing at the Manchester Arena, whether taxi drivers who spent the night giving free lifts to those caught up in the bombing, or those who opened their homes under the Twitter hashtag #roomsformanchester to people who needed somewhere to go.

It has continued all week, morphing into help for the helpers themselves, ranging from food and refreshments for the emergency services and the armed police on the streets, through to attempts to raise money for the homeless Mancunians who rushed to Monday night’s victims.

In Manchester, hearts were worn firmly on sleeves and strangers had reached out to each other as a matter of course in the days since the atrocity, she said. Her friend, Joanna Radcliffe, from Nottingham but who now also calls Manchester home, added: “There is a sense of identity that you just don’t find elsewhere. I have been here for 10 years and there is nowhere else like it – it’s a city that takes you in and makes you feel part of it, even if you were not born here.”

At Manchester’s tattoo parlours, hundreds of people have been queueing to get bee inkings in a show of solidarity, donating £50 to help the families of those killed or injured. The worker bee, said to be a legacy of the city’s textile industry, is now seemingly ubiquitous, whether in graffiti stencilled on walls or in framed art in the front windows of high-end galleries, and usually accompanied by another longstanding term of civic pride: “I Love MCR.”

It’s a common sight amid the tributes in St Ann’s Square, the city centre location that has become the focus for Manchester’s remembrance and where the crowd broke into a spontaneous rendition of the Oasis anthem Don’t Look Back in Anger at the end of a minute’s silence on Thursday.

From underneath the statue of Richard Cobden, the radical Liberal statesman and co-founder of the Anti-Corn Law League, the expanse of flowers continues to grow, along with other items: balloons, teddy bears and football scarves of the city’s two big clubs as well as those of other towns in the Greater Manchester area.

By the Saturday morning, as showers interrupted the heatwave, the first drops of rain were falling on the flowers and tributes.

You can read the full The Guardian article here