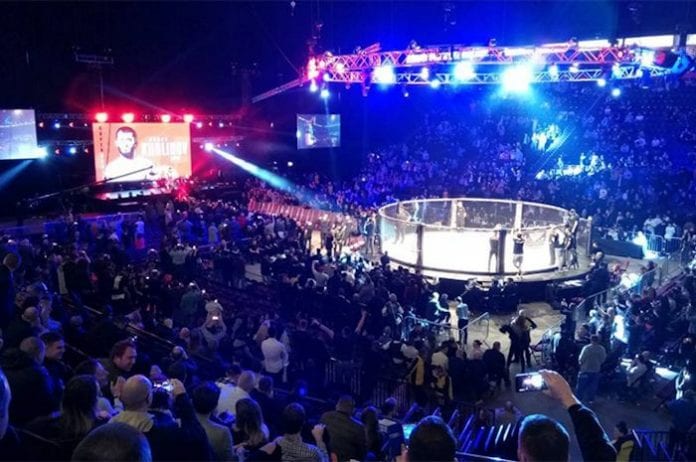 Every combat sports show needs a niche. For ACB, it’s a disciplined, fluid fight schedule. Contests are rolled out in a conveyer belt fashion with a fresh pair of fighters en route to the cage seconds after the previous match-up draws to a close.

The promotion wears its slogan ‘less show, more fighting’ with pride, culling pre/post- match panel punditry in favour of a more fleshed-out fight card. Athletes have their names lit up on big screens as they stroll to the ring, but ACB largely prioritise the delivery of raw, alacritous action over glittery exhibition.

Manchester Arena looked as impressive as ever as the venue for ACB 54 on Saturday, but it was clear from the beginning that the focus was on the fighters inside the cage and not the spectacle surrounding them. The promoters delivered on their promise of some memorable contests with two spectacular knockouts in the headliners and an enormous upset during the preamble.

Perhaps the biggest news of the night for Manchester was another victory for the city’s in-form fighter, Brendan Loughnane. Every time the Withington-born lightweight climbs into the cage, he looks better than ever before, and served a sizzling first round kick to opponent Mike Wilkinson who flopped to the floor after just two minutes.

Whilst Loughnane’s swift and stylish victory was perfectly in tune with ACB’s fast-action motif, Mamed Khalidov managed to go one better in the blockbuster main event. The legendary middleweight knocked out opponent Luke Barnett in just twenty seconds of the show’s final contest, igniting rapturous delirium among his colossal Polish fan base.

Headline knockouts aside, ACB 54 was also home to some shocking upsets, notably a defeat for high-flying Saul Rogers. The Bolton fighter had been slapped on the ACB 54 promotional posters and was widely tipped to stretch his win streak to seven against last gasp replacement Aurel Pirtea on the night. However, the burly Frenchman had other ideas, choking out Rogers in the second round to plunge the Manchester Arena into stunned silence.

Whilst Rogers was dealt a disappointing setback, there had been greater fortune for Manchester earlier in the evening with wins for local boys Kane Mousah and Andrew Devent. Mousah emerged from a gruelling slog with Lewis Monarch for a unanimous verdict victory, whilst Devent turned back the years to blitz past Danny Mitchell.

Rob Whiteford’s fine triumph over former UFC-er Nam Phan was another notable victory of the evening. The Scotsman evaded Phan’s wild hands to fasten down an impenetrable chokehold submission after just 29 seconds, screaming “I never went away!” to the press table during his victory lap.

Like most MMA organisations, ACB is happy to hop between venues, offer fighters a colourful stage, and host its own belts and titles. But where it sets itself apart is its emphasis on uninterrupted entertainment. At the Manchester Arena, contests were churned out at an unparalleled pace, with more than forty fighters taking part over seven hours.

ACB moves to Dushanbe in Tajikistan next, before hosting shows in Paris and Moscow later in the year. It will continue to traverse the globe as it grows and thrives, and given the rising popularity of combat sports in the United Kingdom, it seems likely we’ll see the promotion back in Britain in the not too distant future.

After the success of Saturday, it’s safe to say Manchester would welcome ACB again with open arms.