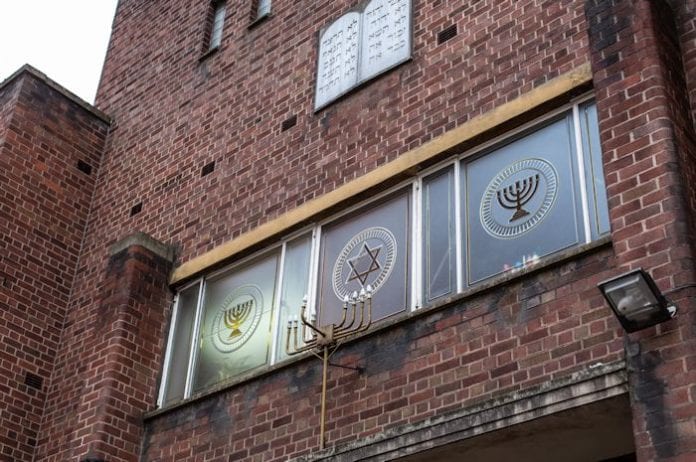 Manchester has long had Britain’s biggest Jewish community outside London.

The first recorded Jewish presence in Manchester was in 1788 on Long Millgate near what is now the Cathedral – Hamilton Levi, a flower seller, was listed in that year’s trade directory. Around this time, a Jewish community grew up by the Collegiate Church (now the Cathedral). That’s where people lived when Manchester was a small town surrounded by countryside within a mile walk.

The first generation of Manchester Jews consisted mostly of German hawkers and peddlers, dealing in easily carried commodities like second-hand clothing, optical lenses and cheap jewellery. They were economic migrants and came to Manchester to prosper.

Because Jews need to walk to synagogue on the Sabbath, they set up a synagogue out of some old warehouses on Garden Lane, next to the Infirmary, all long since wiped out by what is now the Printworks.

Nearby was a Jewish burial ground, paid for by Samuel Solomon, a well-known quack doctor, responsible for the supposed cure-all “Balm of Gilead” which was mostly intended to discourage self-abuse.

One member of the community became one of the most powerful figures in early 19th century Europe.

In the years before he founded what is now one of the most powerful banks in the world, Nathan Mayer Rothschild was a Manchester cotton merchant. His father, Mayer Amschel, had founded a bank – now one of the world’s best known – in 1785 in Germany, and sent four sons across Europe to make their fortune.

Young Nathan Mayer went to London in 1799 and then decided there was money to be made in Manchester at the onset of the Industrial Revolution.

He arrived in Manchester with the enormous sum of £20,000, and in a few years had trebled it, despite speaking little English. But his fellow businessmen regarded him with suspicion, maybe even jealousy, and required cash down when he wanted to buy anything. When a rival once asked Rothschild for the secret of his success he replied: “Minding my own business”.

But how did Rothschild transport the money in those dangerous days? Coins would be out of the question. Gold or bank notes could be easily stolen, especially on the stagecoach journey to the North. The solution was ingeniously simple.

Before leaving Germany, Rothschild turned his cash into diamonds, or probably one diamond, which he swallowed before leaving Germany. When it later emerged from a different part of his body, Rothschild could then clean it up, and do the same again, until he was settled in Manchester, and could turn the jewel into the local currency. That simple. Thank goodness for credit cards now.

It is believed that in Manchester Rothschild, ingeniously, worshipped at the synagogue on the Saturday and the Collegiate Church (now the Cathedral) on the Sunday so that Christians would get to know him and not feel threatened by his being Jewish.

In 1808, he bought huge quantities of gold from the East India Company – then the most powerful firm in the world – and used it to finance the British government’s battles in the Peninsular campaign. Rothschild wound up his Manchester affairs in 1811 but continued to prosper.

A bigger wave of Jewish immigration into Manchester took place, this time from eastern, rather than western, Europe after the assassination of the Russian tsar, Alexander II, in 1881 unleashed a wave of pogroms – attacks against Jews.

These people were generally religious, spoke mostly Yiddish (a mix of German, Hebrew and ancient Aramaic) and, well, looked different.

The established Jews in Manchester, who had tried to anglicise themselves, felt threatened. They would meet the new arrivals at Victoria Station and hand them half a crown to move on west from adjacent Exchange station.

In the 19th century, the area around the old church/Cathedral became more and more commercialised, so the local Jewish community moved a mile north to Strangeways and Cheetham, where they flourished around the end of the 19th century and early 20th century.

In the mid-20th century, they moved further north, to Hightown, as captured in Louis Golding’s magnificent novel, Magnolia Street (1932). By the time of the Second World War, they had moved even further north, to Prestwich and after the War to Whitefield, at which point the migration north ended.

Like Moses with the River Jordan, few Jews crossed the Irwell into Radcliffe. More recently,  religious Jews have actually headed back south to The Cliff in Lower Broughton.