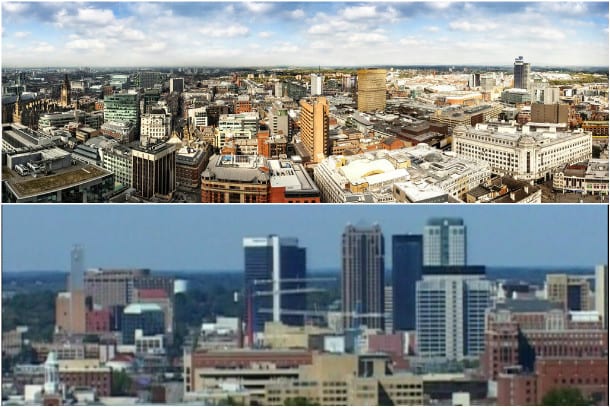 Last week the Guardian published a piece by John Harris on the ‘great reinvention of Manchester.’ Mr Harris spent 3 days here as part of a series of urban reports entitled ‘The Future of Cities’ which included visits to Bradford, Plymouth and Bristol.

The article reflects on or ‘the improbably glitzy revival of England’s second city’ and includes an interview with council leader Sir Richard Leese, the man who has presided over the remarkable transformation of the city centre – and the huge increase in the number of people who live there – which has taken place in the last 20 years.

Manchester is “a far more pleasant place than London – or pretty much anywhere else in the country,” says Sir Richard. “The middle of town was a Monday-to-Saturday, 9-to-5 business centre. It went to sleep at 5 o’clock most days: outside those hours, it was dead.”

According to Mr Harris, Manchester is, “the place….to which a lot of other English cities look for clues about how to somehow escape the post-industrial condition, and make the most of the 21st century.”

But it’s not all sweetness and light. The article contrasts the city centre not only with how it used to be but with far less attractive areas just a short walk away.

The article is well worth a read – we think he got it just about right. Also worth reading are the comments it received – nearly 1700 of them (compared to Bristol (613) and Bradford (563)).

Suffice to say, opinion was divided about the article and about Manchester, too, which is only to be expected because, to quote Harry Callahan (Clint Eastwood) in The Dead Pool, ‘opinions are like a**holes. Everybody’s got one.’

To save you the time and trouble, we trawled through them all to give you a flavour of what people said. Here are some of our favourites.

“It always rains there. If you see sunshine it’s a miracle.” (Vault78)

“Manchester isn’t a patch on London. Last time I went the place was full of weirdos who say ‘Good Morning’.” (ancientlabour)

“I moved from London directly to Manchester. The hang up there about London and all things southern is striking. It’s an inferiority complex really. But the people are definitely great. Very friendly, open society with few pretensions other than to be trendy and hip. Best place I’ve ever lived, out of 7 cities. It’s not that expensive either. You can tram it in (a lot do it on the bunk) and have a great night/day for as little as the outskirts or most other places.”(mazungo)

“Manchester still has something for everyone. It’s far from perfect, but the reason it is what it is is because people who live here love it and are invested in it. The rain is actually a bit of a myth, but at least serves to keep away softies and moaners who are put off by occasional drizzle.” (Peter Nexus)

“As someone who left in 1989 to live in London and came back in 2002 just as the Commonwealth Games were showcasing the city and the central retail core was regenerated after the IRA bomb, the transformation in 25 years has been remarkable.
The city was then a place that ambitious young people left in their droves, nothing really was open after 6 o clock and no one but the odd caretaker lived in the city centre. One nightclub does not make a city, even one as fantastic as it was (Fac 51) – now there is an immense amount of internationally recognised culture, Manchester International Festival et al. Not for nothing did Lonely Planet say that the city if one of the top ten cities to visit in the world this year. (Damien Maguire)

“I studied, lived and worked in Manchester. I love this city, and for me no other city in the UK has the buzz of Manchester. Manchester has had more than its fair share of urban problems that is for sure. There are still some of the most disadvantaged suburbs you will find anywhere in the UK that is for certain. However there has been massive urban renewal in Manchester, a huge building programme both commercial and domestic. Things have improved hugely and continue to do so. There is a long way to go yes but progress is being made. I spent the happiest days of my life as a student at Manchester University, and as a music fanatic found the city the most exciting place there could be for the lovers of music of all types. The punk rock revolution in the 70’s was just fantastic in Manchester. I ate my first ever curry in Manchester and loved it, made my first flight in a passenger jet from the airport, and got my degree from the University amongst other things!!!! I made my home just outside the city and go there all the time and still get the same buzz as I did as an 18 year old coming from a dilapidated mining town in South Wales over 40 years ago. Long live Manchester and all Mancunians.” (Alice38)

“There seems to be this desire to portray Manchester as a banging 24/7 metropolis, well it isn’t. Apart from a few student nights, the city centre is pretty much dead on week nights, and try getting home by bus or train after midnight, you can’t. They’ve even knocked off a lot of the night buses at weekends.” (Paganview)

“Manchester is the most over-hyped city in the UK and consequently one that is the biggest let down upon visiting.” (Mevagissey)

“Birmingham is bigger and unlike Manchester its residents have yet to disappear up their own arse.” (rentoulsulcer)

“Shops are closed all over the city, parking is very expensive, traffic spends most of its time at a standstill. Pick up a magazine, go to the recipe page, check the ingredients then go and try to buy them all in Manchester, you will find it impossible. Yes there are thousands of night life spots but alas not a decent deli.” (david261044)

But whether you think Manchester is the greatest city on earth or ‘fur coat no knickers’ to quote one commenter, one thing is indisputable. In a heated discussion prompted by Mr Harris’ description of Manchester as England’s second city, no matter how much bigger Birmingham is, no matter how many Michelin stars it has, and despite the fact that it has a bigger canal network than Venice, in the words ofElephant63, “Manchester is cool, Birmingham just isn’t.”