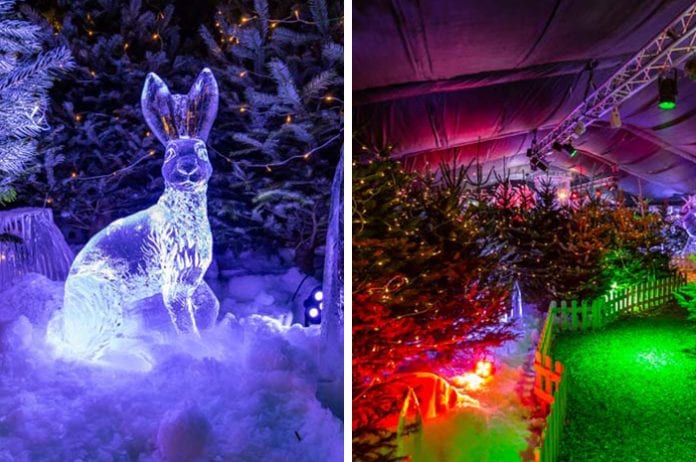 Cathedral Gardens has become a frozen wonderland as the Ice Village returns for a second year.

From now until Christmas, the gardens will be home to a magical ice village, complete with a fairytale cavern, frozen tiki bar and skating rink.

It’s open from 11am to 9pm daily and you’ll also find a handful of food and drink stalls dishing up tasty treats like gourmet sausages and Dutch sugar waffles.

We headed down to check it out. Here’s what you need to know.

Full to the brim with magical ice sculptures and #iceselfie traps, this year’s Ice Cavern is sure to be a hit with friends and families alike.

A winding trail of twinkling Christmas trees and stalagmites guides you through the picket fence-lined icy maze, which took a whopping 250 tonnes of ice to create.

Inside, glimmering frozen beasts have been hand carved by world-renowned sculptors. Work on some started as far back as June. 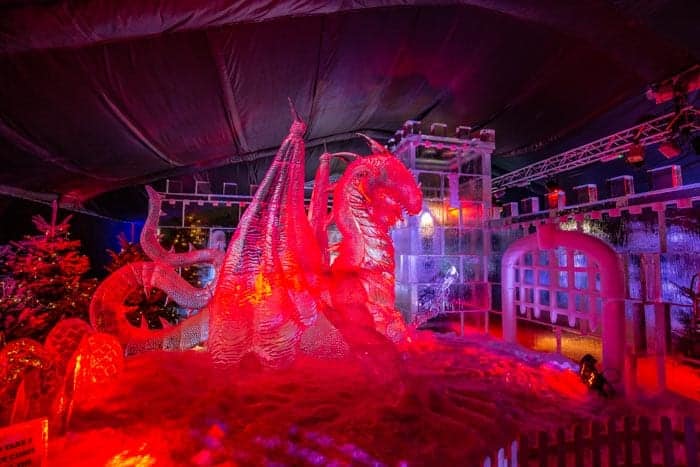 Impressive creations include a magnificent, rearing unicorn, an intricate, icy hanging chandelier and a mini-ice slide that looks a lot of fun for the little ones.

A frozen castle with battlements and turrets built from solid blocks of ice is guarded by a towering, fierce-looking dragon lit up in red which bares its fangs.

Another scene shows the castle’s dungeon, with an ogreish guard wielding a lantern flanked on one side by a knight in shining armour and on the other by an icy skeleton still chained to the wall. Behind the skeleton, a rat crouches quietly. 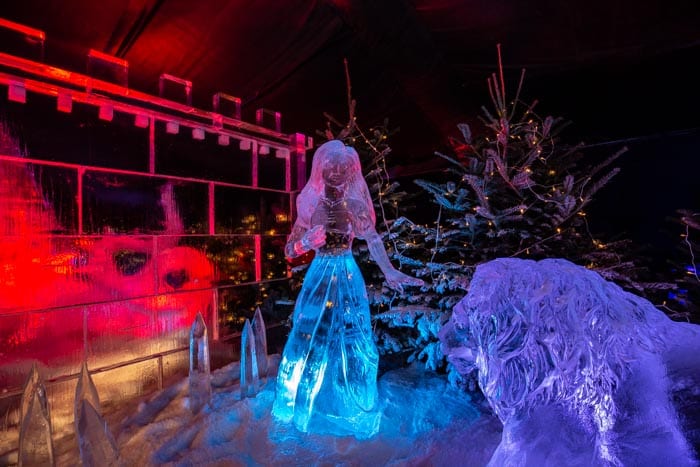 Elsewhere, a frozen princess holds her hand out to an approaching lion, whilst a frozen Cinderella-style chariot dares you to sit on it for a photo op.

Most of the sculptures are made from clear ice, but a few are coloured by mixing in paint during the sculpting process. Magical toadstools and a giant green caterpillar inject pops of colour. 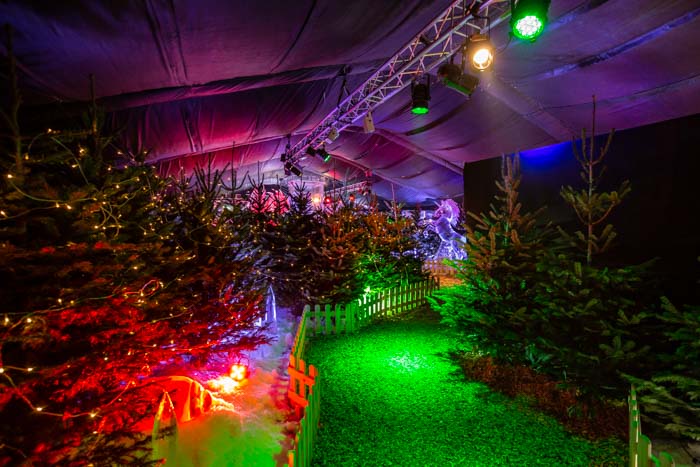 Everything is kept at a brisk -10C to keep the sculptures intact, so make sure you put on your hat and gloves before going in. It’s chilly in there.

On the upside, once you emerge into the gift shop stuffed with cuddly owls, polar bears, penguins and puffins, it’ll feel positively balmy. They also sell ‘little hottie’ hand warmers, worth picking up if you’re planning on going around again.

Soon you’ll also be able to visit Father Christmas in his charming timber cottage here too, but the main man hasn’t officially landed in Manchester yet. 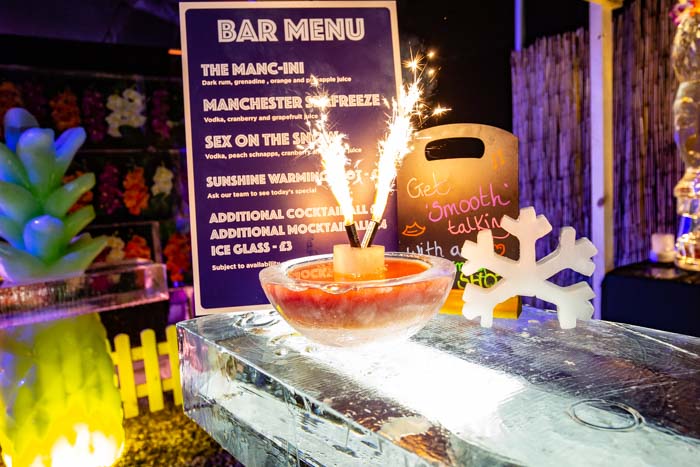 A brand new addition to this year’s ice village, the ice tiki bar can be found next door to the ice cavern. Here, more giant sculptures include an Easter Island Moai head, a frozen pineapple and a half-dressed banana with its peel hanging from its waist.

Admission here is via a separate ticket to the other Ice Village attractions and includes a tropical cocktail or mocktail served in an ice glass. 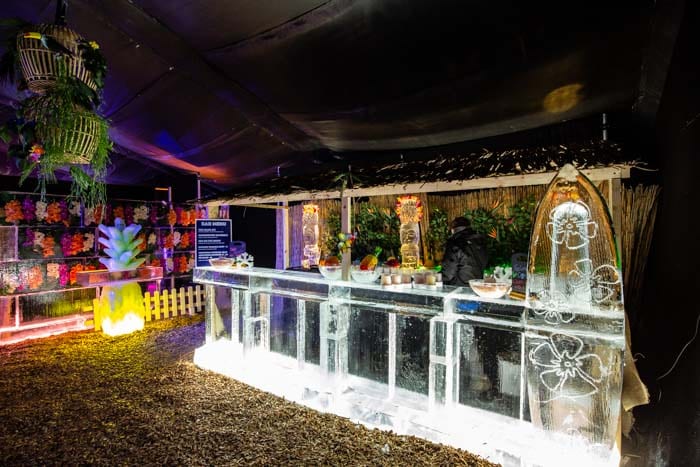 Drinks options include ‘The Manc-ini’ (a mixture of dark rum, grenadine, orange and pineapple juice), ‘Manchester Seafreeze’ (made with vodka, cranberry and grapefruit juice) and ‘Sex on the Snow’ (vodka, peach schnapps, cranberry and orange juice).

There’s also a choice of ‘warming shots’, which could come in handy in the frosty -8C cave.

The bar is also offering shareable giant ice bowls on special pre-order. These super-size cocktail showstoppers are presented with sparklers and umbrellas and served in a solid ice bowl. 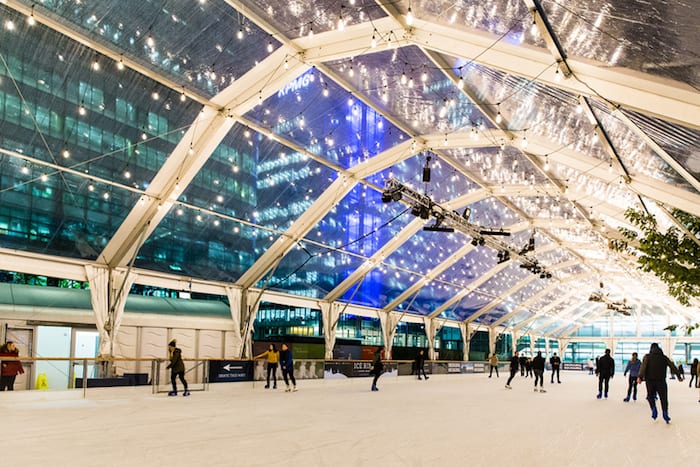 This year’s ice rink has had an upgrade and now comes with a transparent roof to make it an all-weather attraction.

Meaning this year Christmas you can skate underneath the stars as you glide across the rink. And with room for up to 100 skaters at a time, there’s definitely plenty of space.

Open daily from 8th November to 5th January 2020, you can hop on between 11am and 9pm most days. The exceptions are Christmas Day when the rink will be closed, and 14th November and 31st December, when opening times will be extended to 10pm.

Off-peak prices start at £11 for adults (13 years and over) and £9 for children. An off-peak family pass, meanwhile, will set you back £35. And there is a 10% discount for groups of 10 or more when booking together.

Peak prices start at £13.50 for adults and £10.50 for children, with a family ticket (one adult and three children or two adults and two children) rising to £40. Tickets can be purchased at the box office or online.

Skating sessions start on the hour and last for 45 minutes.