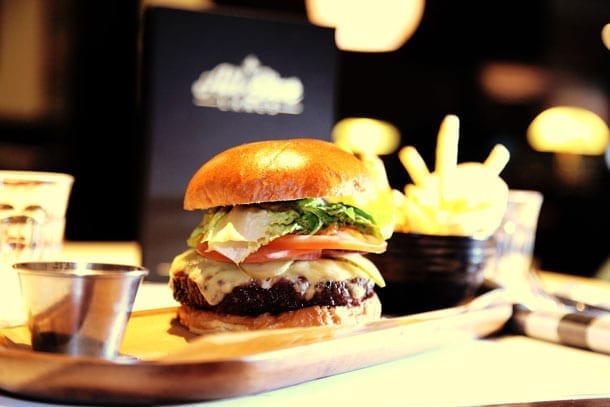 All Star Lanes, Manchester’s new boutique bowling and dining venue, has announced a tasty partnership with local charity Forever Manchester, helping to fund community groups and projects across Greater Manchester with every bite of their famous burger.

All Star Lanes will be supporting local initiatives by donating 25p from every burger sold in its authentic retro American restaurant. To celebrate the launch of the partnership, the charities’ chief executive Nick Massey headed down to All Star Lanes to get a taste of the burgers himself with general manager Angus Pride.

The burger is one of All Star Lanes’ signature dishes and in an increasingly fierce burger market in the city they went all out to find the very best. After touring the north west sampling beef (tough gig) the team decided Chorlton’s own “Frosty the butcher” (WH Frost) made the finest patty around and so, cooked over wood in the Josper indoor BBQ and served in a toasted brioche bun, they’ve created a burger as good for the soul as it is the conscience.

Nick Massey chief executive of Forever Manchester comments: “It is fantastic to see All Star Lanes making such a brilliant commitment to support local people across Greater Manchester – it shows a real passion for their new home here up north. Their donations will allow us to support a wide range of exciting projects from community allotments and orchards to lunch clubs for the elderly. We are really looking forward to working with such an exciting brand.”

Mark von Westenholz, CEO of All Star Lanes added: “Supporting charities has always been at the forefront of our business. In London we have supported Magic Breakfast for the last 5 years. We wanted to work with a Manchester charity whose work has a direct impact on local people here too, and we are delighted to have partnered up with Forever Manchester whose approach really fits in with our ideals.”