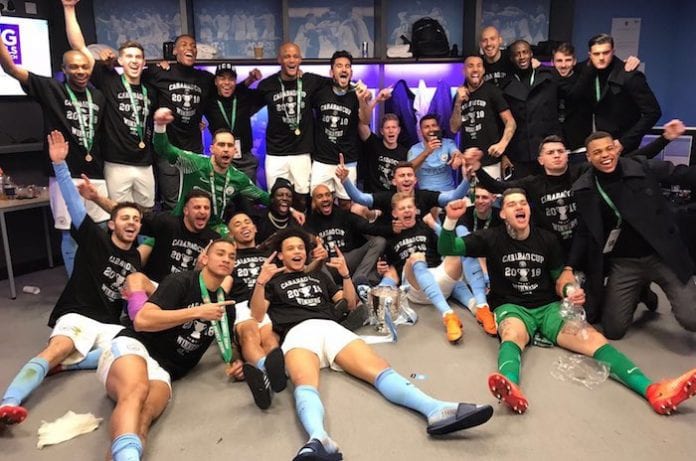 A few weeks ago we thought we were looking at the beginning of the end for Manchester City legend Vincent Kompany.

Guardiola secured the services of record signing Laporte in January surely with the belief that Captain Kompany was past his best.

Yesterday however, Pep gave one of City’s favourite sons the nod over the younger generation – and he got a glimpse of Kompany at his very best.

In fact it was three players who have been with the club some of the longest who all put paid to Arsene Wenger’s hopes of lifting the only domestic trophy to elude him in his career at Arsenal.

Vincent Kompany, David Silva and Sergio Aguero all got their names on the score sheet and all had something to prove.

Kompany has struggled for years with recurring injuries and needed a solid performance – in recent matches he has looked nervous and certainly not his usual self.

Sunday afternoon, however, was a different story.

Following his man of the match performance, the City skipper told reporters he had a premonition prior to the game that he would score.

“It was funny as before the game I thought I was going to score,” he said.

“I came close on the day and there was some luck but also a lot of self-belief.

“It was a difficult game but we did really well in controlling the space and I’m really proud of the team performance, and winning 3-0 at Wembley is a great result against any opponent.

“I’ve been in the game 15 years and you always have to be ready.

“I’ve been training well and supporting the lads when I’m not playing, and when I play I give it everything I have.

“If I look at my personal situation, days like today make every minute’s hard work worthwhile.

“Every chance you have you have to take and today I did it and the team did it so new are very happy.”

David Silva is travelling back and forth between England and Spain to be with his family following his son being born extremely prematurely.

Guardiola and Manchester City have made it clear that he could miss as many games as he needs as his family come first.

His goal and performance on Sunday will not only be an emotional one for him, but reminds everyone just what we are missing when he is not there.

Then we have club record goal scoring striker Sergio Aguero. No words seem to do this man justice, yet there seems to be an underlying issue between him and Pep.

Since Gabriel Jesus got injured, Aguero has led the line and become City’s all time top goal scorer.

In our last Premier League outing at home to Leicester he produced a masterclass in the second half – scoring four goals.

It will be interesting to see if upon the re-arrival of Jesus what happens to the playing time of Aguero – three more seasons at City could see him join Alan Shearer and Wayne Rooney in that elite 200 club.

The Manchester City Manager watched from the pitch as Kompany and the team lifted the first piece of silverware under his reign.

There is possibly more to come from this season. The Premier League trophy certainly looks likely, but the Blues are still in The Champions League and have plenty to offer.

Ex-City Manager Roberto Mancini took to Twitter to congratulate the three City players – Company, who he inherited when he took charge, as well as Silva and Aguero, who he signed.

Congratulations to @ManCity for #CarabaoCup. I’m happy for @aguerosergiokun, @VincentKompany and @21LVA who have already made the history of the #ManCity and keep winning new trophies! pic.twitter.com/mD3KVYZ1Ph

Mancini was the first to bring success to the club and was adored by the City faithful as he was responsible for a new era in the history of Manchester City.

If Vincent Kompany can remain fit he can definitely play a major role in Guardiola’s plans, David Silva always impresses and Aguero is simply unstoppable when he’s on his game.  .

Defensively City are a different team when Vinny is in the mix, and with Ederson having such a good season in goal for once our defence looks more like that of a Champions League winning side.

Our attacking players have always had the ability to compete with Europe’s elite. Maybe this year all the pieces will finally fall into place.