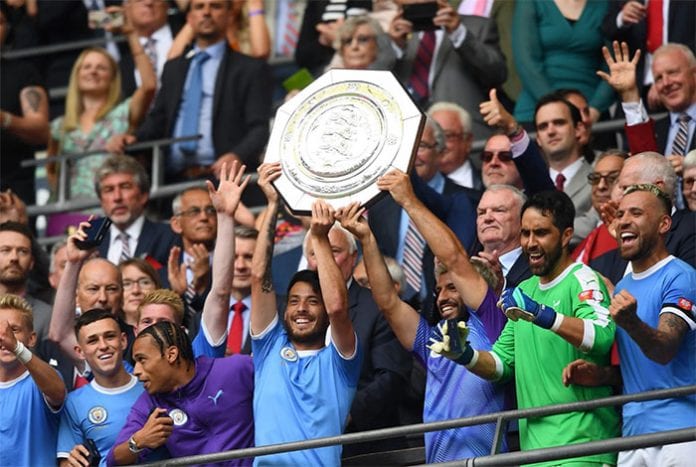 The old cliche ‘a game of two halves’ summed up Sunday’s Community Shield between two sides tipped to be battling it out again for the Premier League title.

In the end it was defending Premier League champions Manchester City who lifted the first silverware of the 2019/20 season.

A close game was predicted and it took a penalty shoot-out to decide the winner following a late Liverpool surge and an incredible goal line clearance from Kyle Walker in injury time.

It wasn’t just the players battling it out. Both Pep Guardiola and Jurgen Klopp are known for their relentless passion for the game and as usual neither disappointed. Pep was as animated as ever on the sidelines throughout the game and his reaction to a sloppy, unpunished challenge on City captain David Silva by Gomez made him the first manager to receive a yellow card under the new rules introduced this season.

They spent much of the afternoon at each other’s throats on the touchline but when the final whistle blew for the conclusion of 90 minutes they embraced and shook hands.

Kyle Walker’s stoppage time clearance may have seen the Blues get to the end of the game level and force penalties but they still had a job to do from the penalty spot and although all five City penalty takers hit the back of the net it was City’s No.2 who clinched the victory with an instinctive save from Wijnaldum for Liverpool’s second penalty. That save along with the successful City penalties handed Guardiola his second successive Community Shield – and earnt Bravo plenty of praise.

The Blues started brightly, creating most of the key chances in the first half, controlling the play and opening up a rusty Liverpool defence which was key to their success last season. With Sergio Aguero still recovering from an extended break from his inclusion in the Copa America Pep Guardiola decided not to risk an injury this early on to the star striker.  Instead, Raheem Sterling started up front against his old club in the knowledge he had not yet scored against them in eleven previous meetings.

Leroy Sane started for City on the left hand side, adding some pace and looking to drive the Blues forward. The City fans were looking for an insight into Sane’s mindset following the distraction of possible interest from Bayern Munich, but his game ended abruptly with a suspected knee injury, following an awkward fall from an Alexander-Arnold tackle.

The resulting free-kick set up Sterling to score the first goal of the afternoon from a David Silva flick and seemed to set the first half tone of City’s possession style of football against the counter attack style adopted by Liverpool.

The second half showed more of the pre-season rust expected from the two sides with more misplaced passes and out of character decisions from some of the key players. 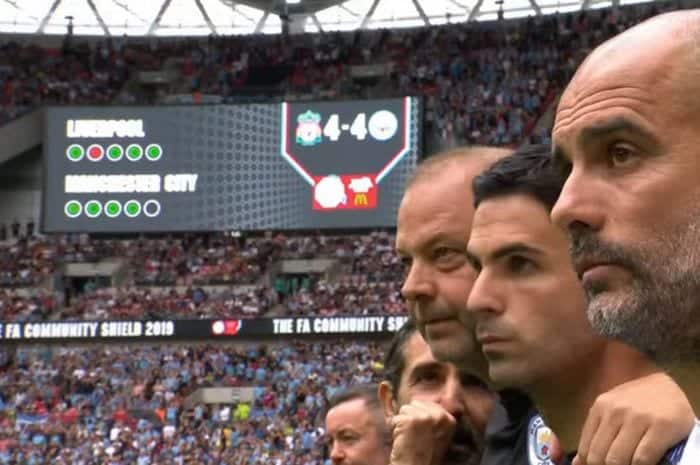 Liverpool continued to press and hit the woodwork twice following chances from Salah and Van Djik and their pressure finally paid off in the 77th minute following some poor marking at the back from City and a well timed header from Matip.

Sterling has been criticised in the past for his finishing and his decision making when it comes to the final third, but seemed to put these to bed following a very successful campaign last season.

The England international, however, showed some of his old traits when fluffing a one-on-one opportunity with Alisson. Presented with the choice of either squaring to Kyle Walker or taking the opportunity on himself, he seemed to freeze and decided on neither – a big chance missed which will probably be put down to pre-season lack of match readiness.

Kevin De Bruyne produced yet another man of the match performance which is a welcome sight for Blues fans, whilst Rodri made an impressive start to his Manchester City career with a solid performance in the middle as he gets used to the tempo of the English game,  which will give Guardiola some encouragement for the season ahead.

The Community Shield traditionally doesn’t give much insight into what is to come from either of the teams involved but the first piece of silverware and a win of any kind over a team who will be pushing for the title is the perfect preparation for City’s first game of the new season away to West Ham on Saturday.

Many discount Sunday’s game as meaningless as key players are always missing, but it means City are now eight games unbeaten at Wembley. Like both managers said before the game, if this game doesn’t mean anything, why are we playing it?