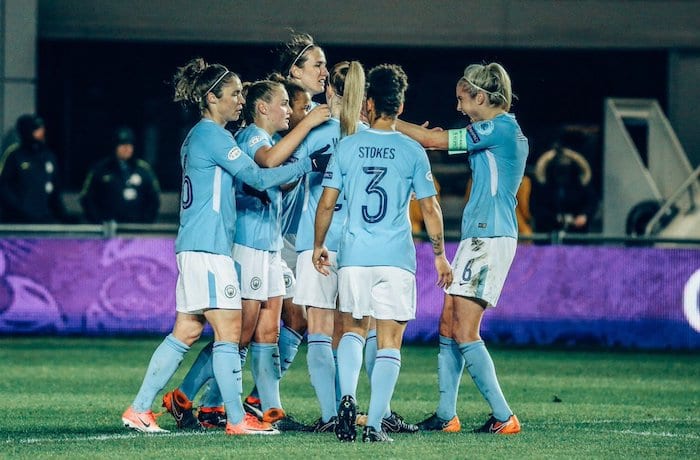 Recent years have seen women’s football begin to gain some real traction around the world, nowhere more so than in the UK.

Former Manchester United and England defender Phil Neville took charge for his first three games as the England’s women’s coach who are now ranked second in FIFA’s world rankings – their highest ever position and the highest position achieved by an England team.

Following their 4-1 win against France, a 2-2 draw with Germany and a 1-0 loss to the US, England’s Lionesses pushed Germany out of the top two for the first time since 2009.

With such a wealth of international talent in Manchester City’s women side, currently one point behind leaders Chelsea, it’s no wonder that the club is pushing hard to promote equality between the men’s and women’s sides.

Share your video scoring a goal with #SameGoals and we’ll send you a free Manchester City ball! https://t.co/eDjySTN8ob pic.twitter.com/9yEchxRgO6

“My first memories of football are kicking a ball about on the playground. You really can play anywhere once you have a ball, which is why Same Goals is such an exciting initiative. We’re getting girls to give football a try and providing them with a ball so they can keep practising.

“Inspiring the next generation of players is important to us as a team, to be considered role models is an honour and we hope what we do today can make a difference. It all begins with a ball and from there anything is possible.”

The video on the club website encourages women to send in videos of them either scoring a goal or saving one.

The goals can be scored anywhere and using any type of ball and for each video received the club will send out an official ball.

The move follows on from February’s launch of the Same Club, Same Passion initiative, as part of which City merged both their men’s and women’s social media channels to provide a 24/7 access to news and behind the scenes content in one place.

“Yesterday, we celebrated four years since the re-launch of Manchester City Women. Since 2014, both the game as a whole, and the Manchester City team, have experienced incredible change and success, but we know this is only the beginning.

“Misconceptions about the professionalism and quality of women’s football still exist and that needs to change.

“Same City, Same Passion aims to highlight that the similarities between men’s and women’s football are far greater than the differences and, regardless of who’s playing, it’s just football.

“Merging social media channels as part of this campaign offers us a unique opportunity to increase the visibility of our women’s team and to offer our supporters the chance to enjoy the excitement and passion that defines every Manchester City team.”

Whilst Manchester City have been applauded for their efforts with their women’s team, Manchester United having come in for criticism for not having a women’s side.

This week however they submitted an application to join the FA’s Women’s Super League. If successful the rivalry between United and City will only increase.

Last year the FA launched their ‘Gameplan for Growth’ initiative to double the number of women and girls participating in football by 2020.

At the launch the FA’s head of women’s football Baroness Campbell said: “We want to welcome every girl and woman into the game regardless of ability, background or age. There has never been a more important time for football to play its part in supporting girls and women to become physically active and to lead and administer the game.”

The last four years has certainly seen a positive change in the way women’s football is perceived.

The next four years will no doubt see a significant increase in the numbers of women and girls participating in football as well as increased coverage.

A key to this will surely be getting girls involved in football teams at school – being encouraged to play at an early age will only promote confidence and encourage young girls to get involved.

For those women in Manchester wanting to get involved but not sure how to, visit www.manchesterfa.com for details.