It’s September, schools are back, the nights are slowly starting to draw in – and it’s the time of year when thoughts inevitably start to turn to Manchester’s famous Christmas Markets.

In past years, dates and times would have already been announced and the countdown to a November opening of the festive extravaganza would be well underway.

But of course 2020 is not quite like any other year.

With most of Greater Manchester still under heightened local lockdown measures as the coronavirus pandemic continues its grip over the nation, it has not been possible for Manchester Council to state whether or not the Christmas Markets will go ahead.

A decision had been expected by the end of August – but with the local lockdown still in place, that simply couldn’t happen. Market traders have now been told to expect a decision by the middle of September – although the council is still not stating officially when an announcement will be made on the markets’ destiny for 2020.

They say all major events “remain under review”.

Cllr Pat Karney, Manchester’s resident “Mr Christmas” and city centre spokesman, has admitted all public festive events this year are representing a “real challenge” for the powers that be.

Cllr Karney said this week: “Christmas in Manchester is going to be a real challenge.

“The City Council will lead by example so all our plans will put public health first. We are still working on what we can and cannot do and will announce these soon.”

It’s clearly a huge and complicated call to make – as the council know just how big a deal the Christmas Markets are to the local economy and tourism in the festive run in. Big crowds visiting the markets means a potentially big spend in shops, bars, restaurants and hotels across the city.

Outdoor markets have been permitted since June under the current Government guidelines. But it is the scale of the Christmas Markets and how social distancing could be managed with potentially thousands of revellers packing in to the city for their gluhwein and hot sausage fix that are the big issues for the council.

If coronavirus transmission rates fail to fall in the coming weeks, and local lockdown measures continue to be imposed into the winter in Manchester, it’s difficult to see how the markets in their current form can go ahead.

For many of the local traders who have had huge success on the Christmas Markets in the city centre in recent years there are mixed feelings about what lies ahead, as they wait in limbo for the final decision.

If the markets don’t happen this year, it will slash many traders’ biggest revenue spinner of the year. But if they do go ahead, there are worries from traders that the public may not decide to come – or at least not in the sorts of high volumes seen in past years.

Social distancing measures will be central to the planning – and this will have an impact on customer numbers and traders allowed and indeed on how the entire festive nature of the event, renowned for its mulled wine and hot sausage stalls, can be done in a safety conscious way.

Eddie Osman’s Porky Pig carvery is one of the biggest success stories of recent years on the Christmas Markets – known for drawing big crowds for his Yorkshire pudding wraps.

The eight week festive event is Porky Pig’s biggest of the year, but even Eddie admits he is torn about whether he wants the event to go ahead this year or not. 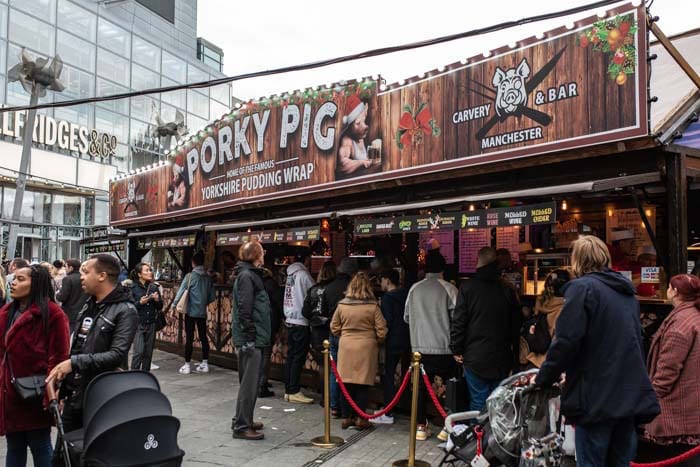 Eddie said: “I know the council are trying absolutely everything to get it to still be on this year, and to work out how to do that. But how do you do social distancing with potentially 100,000 people?

“If it does happen there will be strict, strict rules this year. Normally there are 250 traders but there’s no way they could do that many this year.

“Christmas is our busiest event of the whole year. We need it on, we don’t want it to be cancelled, but how do you plan when so much is still so up in the air? How do you know if people will still come if it does go ahead? It’s just so difficult.”

What about other UK cities?

Last week the organisers of Birmingham’s vast Frankfurt Christmas Market, and Manchester’s nearest rival in terms of festive scale, announced it will be going ahead this year. They confirmed the dates it is planning to open, from November 5th right through to December 23rd.

But even that announcement came with a solemn codicil – that “event information could change due to Covid-19 restrictions”.

Birmingham is currently on the Government’s “watch list” for rising coronavirus cases but has so far escaped further local lockdown measures, unlike Manchester.

However the Birmingham Christmas Market news was followed swiftly by the cancellation of the popular Winter Wonderland event in Hyde Park – where organisers said that despite their best efforts, they could not find a way to hold the event in a satisfactory manner with so many uncertainties and without compromising the size and scale of the event.

With so much still so up in the air here in Manchester, it could become increasingly difficult for the council to commit to a large scale Christmas Markets event like those of past years.

But one things for sure, the clock is ticking on making that final decision… 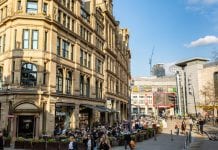 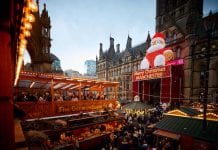 Should Manchester’s Christmas Markets go ahead this year? Mancs have their...