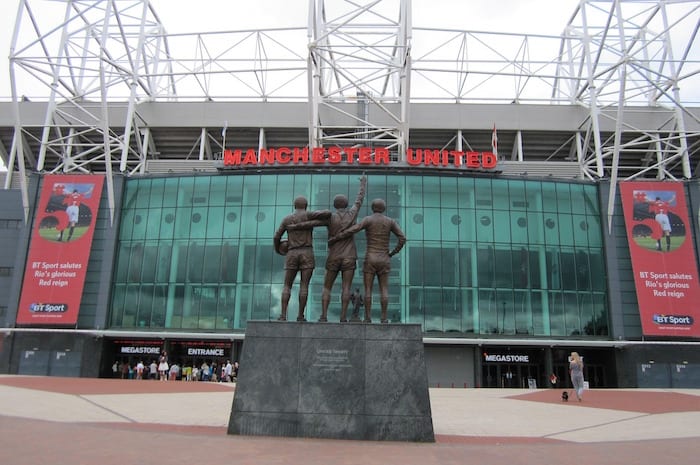 Before the derby there was talk of Manchester United fans wanting City to win. After all, no one can quite stomach the prospect of Liverpool finally getting their hands on a Premier League trophy.

And while that may be the case, this notion clearly went out of the window before kick-off. It was a Derby after all and it’s hard to resist getting one over on your city rivals, regardless of the long game and the eventual winner of the league.

Since the start of the year, there’s been a fixation on the destination of the league title. As if the race for top spot still holds some relevance for United fans. It doesn’t and it’s making them a laughing stock. Much like the team.

The biggest travesty thrown up this season isn’t the potential of Liverpool winning the league. It’s the dire state of the players on the pitch and the club off it.

That much was clear by the gulf in class between the two sides on Wednesday night.

United were plucky in the first half. They seemed to get their defensive tactics right – although stringing five across the back at home is a little embarrassing. They even created a couple of chances and were still in the contest at half time.

Then City went up a gear in the second half and United had no answer.

Key to City’s easy dominance in the second 45 was the injury to Fernandinho. When the Brazilian went off for Leroy Sane, this pushed Bernardo Silva deeper. Fair play to Pep, it was a substitution full of attacking intent and it was bang on. Silva dictated the game and ran riot.

United had nothing in response. And herein lies the problem. United’s squad is so limited. They lack any leadership on the pitch and have little flexibility to adapt to what’s in front of them. What’s also worrying is the lack of response from the dugout to such a blatant switch of tactics.

But what is most concerning about United at the moment is that there’s no defined way of playing.

Yes, David de Gea is coming in for criticism for his recent performances and Paul Pogba continually gets it in the neck when things don’t go right – from me included – but it’s the clueless nature of the attacking play that illustrates how far off the pace in the Premier League United really are.

There’s no link up between the forward players. All we saw on Wednesday night was players running into blind alleys solo, with no support. They were just trying their luck. This was exactly the same against Barcelona.

It doesn’t matter how superior your opponent; you have to have a plan on how to exploit their weaknesses. Since Ole got this right in a couple of away games early in his tenure, it’s completely gone.

Truth be told, United haven’t had it in a very long time.

So this is the size of the job facing Ole. The time for arguing whether he’s the right man or about the manner of his appointment are gone. He’s the manager and he needs to get it right.

New signings are needed. But they have to work. The squad is packed with expensive pieces that simply don’t fit and gel together. United can’t afford another summer with the same lack of strategy.

It needs to begin with the manager. How are they going to play next season? What is the way forward? What is the style they’re going for?

This is something no United manager has really answered post-Fergie.

Unfortunately for Ole, it can’t be about evoking the past (his words before the Barca game began to be a little cringey). It has to be about the future of this team and adapting to where they really are.

It looks like time to get back to basics.

So, United fans, stop fixating about who’s going to the league. It’s time to consider how far the club has fallen and focus on change – however painful that may be.