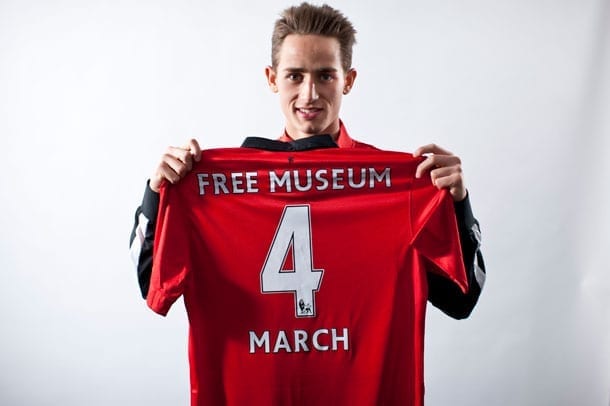 Getting up close and personal with the legends of Old Trafford is now a priceless experience – literally.

Because Manchester United is opening the doors to its award-winning museum free of charge to everyone throughout March 2014.

There will be no admission charge to enter the Museum – named Best Large Visitor Attraction 2013 – for the entire month, as the club says thank you to its fans.

Discover the story behind the most successful club in English football, where visitors can also see the former England and United legend David Beckham Exhibition and take part in interactive games. Combine your Museum visit with souvenir photograph opportunities and a paid tour of the iconic Old Trafford Stadium where you can see the players’ dressing room, walk out of the tunnel and even sit in manager David Moyes’ seat in the dugout.

Whether you’re a Manchester United fan or not, a visit to the Museum is a day to remember for the whole family, whatever the age, and now it’s totally free in March.

Manchester United Group Managing Director, Richard Arnold, said: “We want to say thank you to our incredible fans and everybody who loves the beautiful game.

“The museum is an amazing day out – a fact that has been officially recognised after it won the ‘Large Visitor Attraction of the Year’ award at the Manchester Tourism Awards in 2013.

“Our museum and tour is already extremely popular, welcoming more than 300,000 visitors each year and we wanted to give all fans and football followers a chance to come and experience the Manchester United story at no cost.”

The Manchester United Red Café is also the perfect place to enjoy a bite to eat during your trip, with meal options available to suit the whole family.