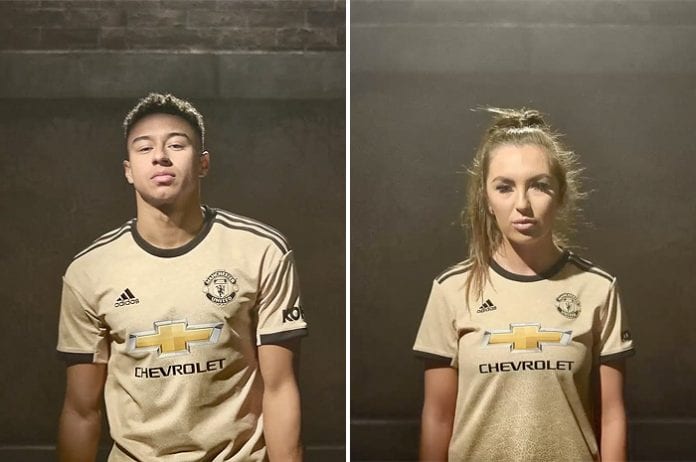 Manchester United have revealed the club’s new change kit for the 2019/20 season.

It’s a gold coloured little number – ‘savannah’ according to an announcement on the club website – which replaces the pink shirt and is inspired by the many mosaics that adorn the streets of the Northern Quarter.

It sounds more like an announcement for a fashion item than a football shirt.

“Breaking away from the traditional colours of a United away jersey, the new shirt features a fresh savannah-toned aesthetic and intricate patterned design.

“Standing out with a new colour palette, the striking new away shirt continues to blur the lines between sport and style, blending both cultures in to a single piece of design, which will of course be seen during our away trips in 2019/20.

“Influenced by the unique artwork of the Northern Quarter, the city is embedded deep within the design as the base colour is overlaid with a subtle pattern.

“The clean savannah colour is paired with a secondary black colour that adorns the adidas three stripes on the shoulders, crewneck collar, trimmed hem and United’s iconic badge.”

Made from 100% polyester, it’s a snip at just £64.95 and it’s available from adidas stores, adidas.com and official club stores including United Direct.

The new kit will be worn in match action for the first time when Ole Gunnar Solskjaer’s team take on Perth Glory in Australia, in a pre-season friendly.

On the other hand, you might decide not to buy the new kit and join the #GlazersOut campaign on social media. The choice is yours.

And don’t worry if you don’t like the shirt. No doubt there’ll be another one along soon.