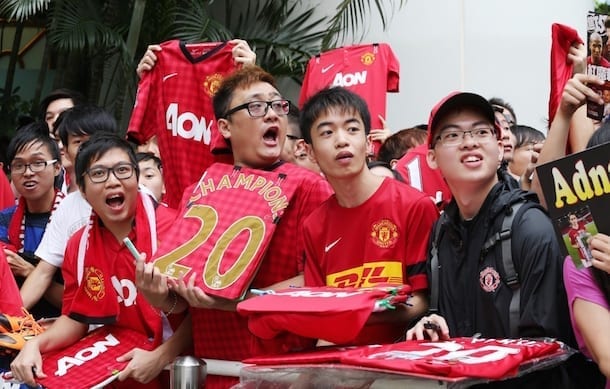 Just the other day, Ripley’s Believe it or Not, the museum of extraordinary things, published a list of modern life’s top 50 misconceptions. Things such as chameleons change colour to match their surroundings, that Mount Everest is the tallest mountain in the world and The Great Wall of China can be seen from space. All things which are commonly held to be true but are, in fact, untrue.

Now Twitter has published an interactive map based on the number of followers each Premiership club has on Twitter and where they live. The map contradicts one of the biggest misconceptions in football-that United fans don’t come from Manchester.

A couple of years ago, I Love MCR did a straw poll on the streets of Manchester city centre. We asked people which team they supported. 75% of those asked were United supporters.

95% of shirts sold by Sports Direct in Manchester this season were United shirts whilst 5% were City. This doesn’t take into account the fact that lots of City shirts will have been sold by the club store on Market Street, but it’s a pretty overwhelming statistic.

The Twitter map shows that every single part of Greater Manchester has more United supporters than City supporters, apart from one-Gorton, where it’s split. And contrary to what United fans say about City fans, even Stockport is Red.

None of these studies are scientific but they are all nails in the coffin of the myth that United fans don’t come from Manchester-something which anyone who comes from or lives in Manchester already knows. They know this because, in their workplace or in their class at school, there are probably more United fans than City fans. Even City fans know it’s true but, understandably, choose not to admit it. At least not in public.

There are exceptions, of course. Some areas are redder than others and some are bluer than others. City have probably got more fans today than they did ten years ago because they have become more successful. But they’ve got a lot of catching up to do.

What Tony Wilson said many years ago remains as true today as it was then: “The myth that no United fans come from Manchester is encouraged by the media and City fans alike. The fact is two thirds of Mancunians support United and one third City. No amount of media or City hype can cover that fact.”

We haven’t got an axe to grind. I Love MCR is completely impartial and loves all of Manchester’s football clubs equally. But we are also devoted followers of the truth. They say that if you repeat a lie often enough, people will believe it’s true. Let City fans continue to proclaim that the city is theirs to wind up United fans. It certainly works. But it’s time the ‘fact’ that United fans don’t come from Manchester joined ‘salty water boils quicker’, ‘there is a dark side of the Moon’ and ‘you lose your body heat fastest through your head’ on the Ripley’s Believe It Or Not list of the most popular misconceptions. Because according to the best available evidence, Manchester is definitely Red.