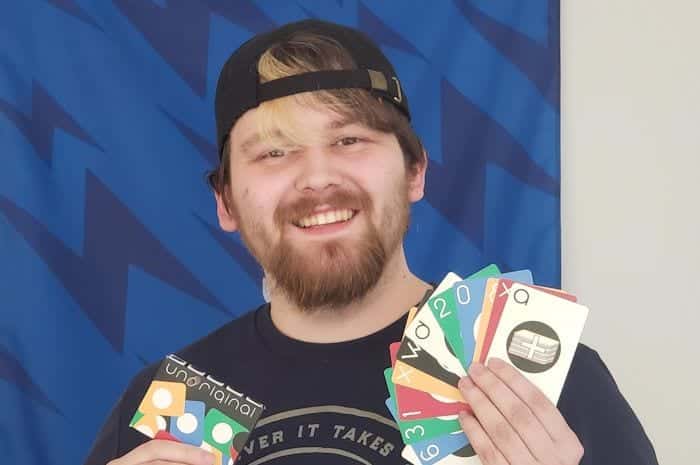 What have you been doing to pass the time during lockdown? Something productive we hope.

Or maybe you’ve been bingewatching all 92 episodes of Mad Men before it leaves Netflix next month.

“As a supervisor in a supermarket, I’ve seen first hand how morale has sunk and I wanted to do something to try and help lift the spirits of people stuck inside their homes.

“I was speaking to some friends one night and one of them, who was in lockdown with their family, had had a pretty rubbish board game night whilst trying to pass the time. So I told him I’d help him out and make him a better game to play.

“So I began work on a new card game, one that was simple to learn, suitable for families and that I could make as quickly as possible so that families could have the opportunity to have some fun whilst also staying safe. It just snowballed from there.”

Over the last two months, he has designed, tested and prepared the game for production.

“It’s been a huge undertaking as I’ve have been managing every aspect of the project by myself,” says Chris.

It’s called Unoriginal and it takes some basic inspiration from the card game Crazy 8s but with players able to add their own twists and rules to make it a much more personalised and exciting game.

“Whenever I hold a games night, we always end up breaking the rules of whatever game we are playing and making up our own,” says Chris, “so I thought it would be fitting to make a game that doesn’t just allow that kind of thing, but encourages it.

“It’s designed to be a game that anyone can play, to bring families together and give them something they can enjoy together,” says Chris. “I think we could all use a little distraction like that right now.

“So far I’ve played with my family and spread it to a couple of friends and their families. One of them told me they’d spent a lot longer playing than they had planned to, before realising it was two hours past the kids’ bedtime!”

Now it’s ready for production. He launched it on Kickstarter earlier this week and made almost half of its funding goal within 24 hours. All it needs now is a final push from the generous people of Manchester.

“I think what’s so appealing is that while it’s incredibly simple to learn and you can just pick it up and play it without any set up, it’s also brimming with strategy. I know from the playtests I’ve done, people are surprised at how into it they get and how much they think about all the ways they can get one over on each other. It gets incredibly competitive!

“It’s the first game I’ve made,” says Chris, “but I’ve had so much fun with it, I’m going to be working on another once all this is over!”