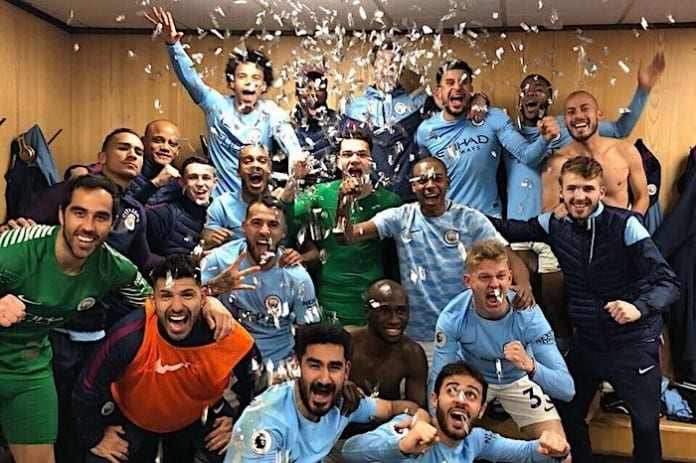 Following a weekend where Chelsea lost, Arsenal and Liverpool drew and City secured a victory over United, the blues see themselves 11 points clear at the top of the Premier League.

When the fixtures were released, the first Manchester derby was already being looked at as an important game.

Sunday afternoon saw City set a new Premier League record with 14 consecutive wins. Pep Guardiola previously came under criticism for his style of play and how effective it could be in the Premier League.

He refused to change his principles and has so far been rewarded with City being acknowledged by the media as the best team in the league.

Following Sunday’s victory he said: “Football is unpredictable. We scored from two set-pieces. At half-time, we said: no regrets. We were disappointed but that will make us stronger – how we react in situations.

At last! A proper Manchester derby that had everything – on and off the pitch

“We showed that this kind of football can be played in England. People say it can only be played in Spain, but we showed it is possible to have the courage to play.”

So what exactly does the victory mean for the title race? Having a comfortable lead is great for the blues, but we are entering the period of the season where games come thick and fast.

Could Pep have had that in mind when he decided to rest star striker Aguero for such an important game?

February will also see the return of Champions League football. City take on Basel in the last 16 and will rotate key players which could lead to a slip-up in the league.

The saving grace could be that United also have Champions League football to concentrate on.

With their realistic chances of overtaking City in the league gradually slipping with each game, Mourinho may well put more effort into the Champions League campaign.

“There are still five months of the season to go, but the title race is over – I do not see anyone stopping Manchester City from winning the Premier League now.

“It was not just the result the leaders got at Old Trafford on Sunday that was significant, it was the way they got it too. They were totally dominant and fully deserved their 2-1 win.

“City are 11 points clear at the top of the table and at the moment they are streets ahead of Manchester United – and everyone else. I don’t see anyone catching them from here.”

Prior to the derby, United had been seen as the only realistic challengers to stop City with Chelsea suffering defeat on Saturday. City, though, had other ideas. They outplayed United from the first to the final whistle.

United only went at City for a few minutes at the end of the first half when they scored the equaliser and also came close in the closing moments when Ederson made a couple of great save to deny Lukaku and Mata.

The fact that United were able to either score or come very close when they attacked should be a warning for City though. It is evidence that although our defence is much improved than recent years, it still isn’t really strong enough.

United also have that come back in the 1996-97 where they overcame Newcastle’s 12 point lead in January to eventually win the league by 7 points themselves. Evidence enough that the title race is definitely not over yet – I’m sure Mourinho would LOVE it if they could do it again.

The advantage is most definitely with City and if they continue to produce the football they are doing then they will be impossible to stop. Visiting Stamford Bridge and Old Trafford and producing those kinds of displays is a real statement.