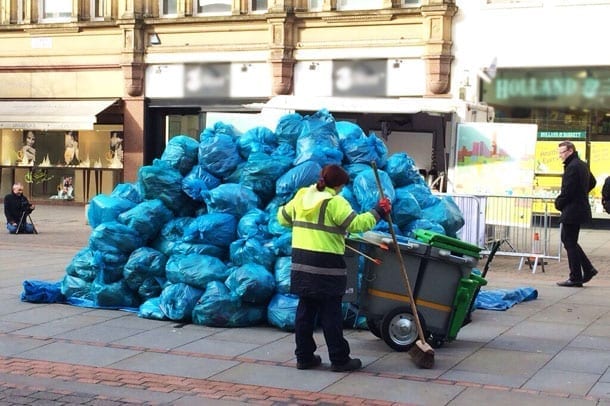 We love Manchester. We hope you do, too. We’re proud of our city, what it has achieved and what is has to offer. But there’s one thing that makes us ashamed of our city. The Manchester Festival Of Litter. That’s right. We’re talking rubbish. It’s everywhere. Manchester must be one of the filthiest cities in the country. Too many people think it’s acceptable to throw their rubbish away on the street rather than take it home or find a bin to put it in.

A group of Manchester residents, together with staff from city centre businesses such as McDonald’s and Starbucks and representatives from Keep Britain Tidy, recently took part in the first of a series of city centre clean-ups. As well as collecting around 35 bags of litter from city centre streets, they planted flowers on streets in the Northern Quarter.

Now the council is urging residents to take pride in their neighbourhoods by organising more community clean-ups across the city. And it will shortly begin offering £200 grants to residents’ groups, schools and other organisations to buy equipment such as bags, litter picks, gloves and bulbs – inspiring more people to take part when they see the events taking place.

The council is also offering advice and support to anyone who would like to get involved.

You can also help by getting involved in Keep Britain Tidy’s Great Litter Count 2014.The Great Litter Count tells us which brands are dropped most as litter on our nation’s streets. Last year, more than 500 people signed up, counting more than 37,000 pieces of litter – on the street, in parks, on beaches or beside rivers and canals. This year they want the Great Litter Count to be even bigger so they can survey more streets and collect even more data on the most littered brands. The more data we have, the more useful it will be in their campaigns to put an end to littering.

To take part, visit keepbritaintidy.org and download the litter recording and guidance sheet for full information about carrying out the survey. Then carry out your litter count, wherever you like, for just 30 minutes any time between 21 March – 21 April. Upload your results from 21 March then they’ll crunch the numbers and share the results of which are the most littered brands from around the country. They will use this information in our campaigns to encourage businesses to make positive changes.