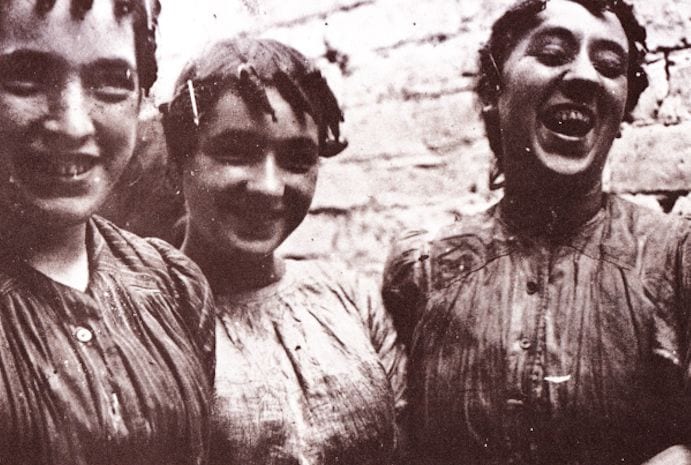 A website on the history of Manchester and Salford Women’s Trades Union Council is to be launched at the end of April.

It’s a chance to find out more about the council, which formed in February 1895 to organise women workers, often working in low paid jobs, into trade unions.

Christabel Pankhurst was a member of the council, as were other prominent Manchester women such as Margaret Ashton, the first woman to sit on Manchester city council. Its paid organisers included Sarah Dickenson and Eva Gore Booth.

Two handwritten volumes of minutes of the council came to light during research into the life of Mary Quaile by local writer Bernadette Hyland.

“I think one of the crucial issues about the minutes is that it is history that was almost lost. When the MSWTUC merged with Manchester and Salford TUC in 1923, the minutes books were taken away by Mary Quaile. Luckily for all of us, her family kept them and handed them over to the Mary Quaile Club.

“This story reflects the way in which much of women’s history has been lost or written out of mainstream trade union history. Our project has rescued that history and made it accessible, by modern technology, to everyone. It is a history that we can learn from today.”

Dublin-born Quaile emigrated from Ireland to Longsight, became part of the Clarion Movement and worked at the Clarion Café in Manchester. She was involved in the formation of a Manchester branch of the National Café Workers’ Union before becoming assistant organising secretary at the Trades Council.

In a rich and colourful life, she upheld her pacifist values, even in wartime, attended a number of Trades Union congresses and even toured the Soviet Union from April to July 1925. She became Justice of the Peace in Manchester in 1934 and was the first woman to be awarded the TUC silver badge, an award given to Trades Council officers who hold office consecutively for 21 years.

It’s a story which is still relevant today, says Bernadette:

“The history of the MSWTUC is crucial to the women of modern Manchester as a century later women still face many of the same problems with cuts in pay, benefits slashed and  the growth of zero hour contracts. We feel that the work of the council can be an inspiration to today’s women workers.”

The launch will take place on Saturday 29th April at 2.15pm in the Mary Quaile Room at the Mechanics Institute, 103 Princess Street in the city centre.