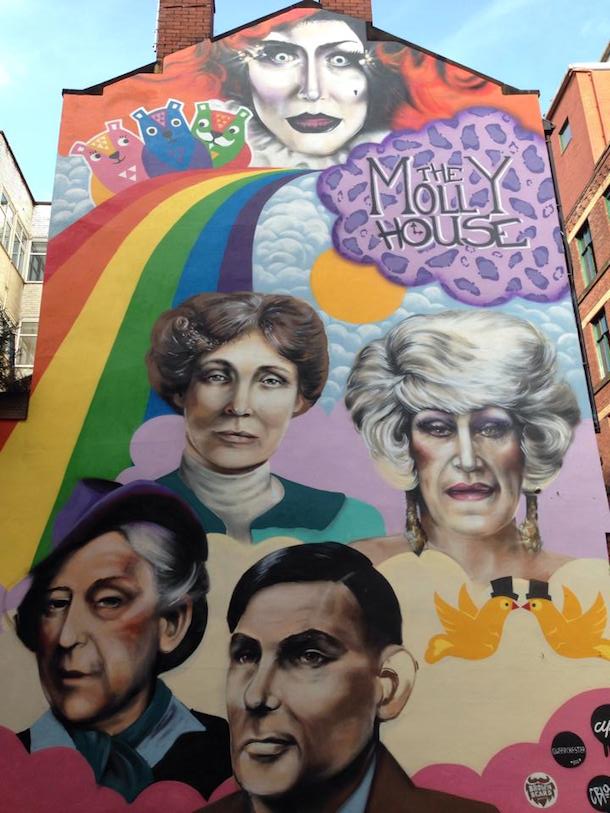 If you’re a fan of street art, then you’ll probably love this amazing masterpiece…

Manchester’s famous Canal Street is now home to the largest LGBT piece of street art in the UK. The multi-coloured makeover took a little more than a week of hard work on the side of The Molly House on Richmond Street to be finished.

Organised by Queerchester, which lobbies and fundraises for arts and culture initiatives in the gay village, the project saw the entries of the street art competition winners Glenn Jones (the overall winner), Lauren Jo Kelly, Adam Pryce and Mark Wallis become bigger than they could ever have imagined with the help of renowned graffiti artists Aylo (Hayley Garner) and Cbloxx (Joy Gilleard). Over 950 online votes and 7 judges chose between 29 brilliantly creative entries to pick the winners.

If you’ve been around the village during the last week or so you may have seen the mural, which was done using spray paint instead of brushes, in progress. Have you been to see it and what are your thoughts? Would you like to see more art like this around Canal Street and the rest of Manchester? We certainly would!

You can read more about Queerchester and its aim for more arts around Canal Street on their Facebook page and for more images from throughout the competition and of the mural as it unfolded.