A season of Horror!

The season kicks off with the annual screening of The Living Dead at Manchester Morgue (1974), and a very special Halloween edition of the Manchester Amateur Gaming League (MAGL) - CPH’s sell out sensation where teams of 4 play an eclectic mix of videogames on the big screen to win big prizes. Renamed MAGHOUL for obvious reasons, this edition will play host to some of the best horror games to have ever haunted screens.

The STAB programme is made up of a diverse selection of films, featuring both classics and cult hits alike. Horror icons Hellraiser (1987), Poltergeist (1982), and the British zombie masterpiece directed by Manchester's own Danny Boyle, 28 Days Later (2002) will grace the big screen once again for audiences looking to fill their Halloween with classics. To celebrate a small screen classic, CPH have teamed up with local comedy heroes A Lovely Time to present a quiz dedicated to the Treehouse of Horror episodes of The Simpsons, which is sure to test even the most Frink-like Springfield experts out there!

The meticulously curated remainder of the programme delves into all shades of horror. Saturday of STAB is dedicated to the feminist heroines of the genre both on and off screen; kicking off with Juno scribe Diablo Cody’s demonic tale of female friendship Jennifer’s Body (2009) starring Megan Fox, followed up by Prevenge (2017), Alice Lowe’s critically acclaimed tale of a pregnant & seemingly possessed women slashing her way through patriarchal struggles. The day ends with the iconic 90’s postmodern slasher, Scream (1996), and a modern classic - the french vegan/cannibal/coming of age story Raw (2016) by Julia Ducournau (who would go on to win the Palme d'Or at Cannes Film Festival for 2021’s Titane).

Rounding out the programme are black horror classics Ganja & Hess (1973) and Candyman (1992) which was recently remade by Get Out helmer Jordan Peele; for horror fans seeking cult classics there will also be Rutger Hauer starrer The Hitcher (1986) and Halloween III: Season of The Witch (1982) - regarded as a hugely underappreciated entry in the iconic horror franchise started by John Carpenter.

Both single film tickets and season passes will be available with accessible pricing in line with CPH’s other event, to help alleviate costs during this cost of living crisis. 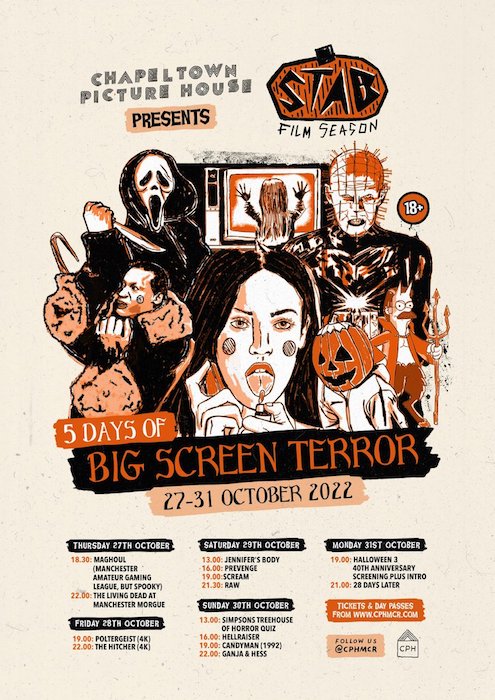