Manchester Day is back! On Sunday 19 June young people from across the city will host an epic day of sounds, moves, and more in Piccadilly Gardens - all created by young people, for young people.

Manchester's favourite day - Manchester Day- returns on Sunday 19 June and Piccadilly Gardens will host a vibrant set of  DJs, live singers, dancers and poetry readings from 11:00 am till 5pm.  All of the acts and activities that will take place have been carefully selected by Manchester Youth Council.

A packed programme of exciting and fun activities for all ages will take place throughout the day, including : face painting, a climbing wall; an Instagram wall, great for those picture-perfect snaps, and a graffiti wall- so young people can express what Manchester means to them through art and creativity.  Moreover, MCR Active will be stationed in Piccadilly Gardens and will be hosting a wide range of sports and fun games for all.

Manchester Day (Sunday 19 June) will wind its way in a riot of music, colour and dance through the city centre - can now be revealed.

Organisers are pulling out all the stops to ensure the city centre will be buzzing all day long with plenty of things to see and do, as well as making sure the iconic Manchester Day Parade is the most memorable yet.

This year's parade draws strongly on Mancunian identity ideas and stories past and present - a parade in which everyone in the city can recognise themselves, whether they're taking part in the parade or watching it. Each of the main floats has a story that reflects Manchester's place in the world, as seen by the diverse communities that make up the city.

The Creative Director behind this year's parade is the internationally acclaimed and award-winning production designer Dan Potra, whose past work includes the Sydney 2000 Olympic Games Opening Ceremony, three Commonwealth Games - the 2018 Gold Coast games, Melbourne 2006, and Delhi 2010 - as well as production design on the opening of the 2010 FIFA World Cup, and the 2008 opening and closing ceremonies of the Liverpool European Capital of Culture.

Prepare to be surprised - behold the Queen Bee as she reigns over her hive of subjects, resplendent on her upcycled gondola. Then, see the railway arches of Manchester come alive with eye-catching creations that explore sustainable living and caring in our community.

Boogie along with bouncing babies and samba beats. Watch out for the Peppered Moths as they make their incredible transformation from white to black. Pollution caused them to change colour during the Industrial Revolution, then back to white again once the air was cleaner.

Check out the holidaying horses passing by in their train carriage, pulled by an engine powered by human pedal power. A view of the future as human ingenuity replaces fossil fuels in the post-industrial age, and we move beyond horsepower and steam. Hitch a ride and take in the view!

After a forced three-year absence due to Covid, this year's parade promises to be an absolute show-stopper as it also welcomes, for their very first Manchester Day, a very special young guest who last year made her home in the city after an epic 8,000 km journey across Europe from Syria.

Little Amal - the 3.4 metre high puppet of a Syrian girl refugee who arrived in Manchester last summer - will be out and about in the city centre during the day, where she will happen upon the parade in a spectacular fashion - before taking in all the sights and sounds of the unforgettable annual parade as it makes its way through the city streets.

With the spotlight for the return of Manchester Day this year firmly fixed on children and young people as part of the city's year-long 2022 Our Year campaign, and as Manchester works towards becoming a UNICEF recognised child-friendly city, event organisers are asking the city's children and young people to look out for Little Amal and be ready to extend the hand of friendship to her, and show her the true spirit of Manchester and how the city likes to celebrate.

Young people themselves are playing a big part in all aspects of this year's Manchester Day. As well as helping make some of the fantastic costumes and parade floats, taking part in the parade itself, singing, dancing, and helping to choreograph it, young people have also been given the special job of curating all the activity on the day that will take place in the event space on Piccadilly Gardens.

They've programmed an epic day of sounds, moves, and more in the space. From street dance and soulful acoustic sets, to urban positive rapping, an Instagram wall - great for those picture-perfect snaps - and a graffiti wall for young people to express what Manchester means to them through art and creativity. The packed programme of exciting and fun activities throughout the day also includes a climbing wall for those who are feeling a bit more energetic, along with sports sessions and fun games for all courtesy of MCR Active, and face-painting.

Across the city centre, Cathedral Gardens will come alive throughout the day with free entertainment for all ages from 11 am - 5 pm. Try your hand at circus skills, feel the beat with live dance and music, and be entertained as you explore the food and drink stalls on offer. You'll also be able to meet the Climate Change Mythbuster to help debunk some popular myths about what we can do in the face of a climate emergency.

Over in Exchange Square, explore exciting, sponsor-led activities and discover the Manchester Letters - a magnificent installation of human-sized love letters to the city, created by three local artists and Manchester people in 2021 as part of the Thank You Manchester Weekender.

The worker bee is the symbol of the city, so it's only right that this structure starts off the parade in style. The part-gondola, part insect design pays homage to the city’s rich industrial heritage and imagines Manchester as a kind of Northern Venice, with a nod to Elizabethan grandeur, both past and present.

2022 in Manchester is Our Year: a year-long celebration of children and young people across the city. This float represents the children of our city and the power of play to transform the lives of everyone, young and old, across Manchester.

This float references the story of the Pepper Moth, which evolved to survive the Industrial Revolution in the early 1800s, by changing colour from white to a speckled black and grey. By imitating the soot that stained the buildings and hung in the air of the city, the Pepper Moth learned to navigate a newly-industrialised landscape. Happily, now that the air in Manchester is cleaner in 2022, the Pepper Moth has once again changed colour to a lighter camouflage.

Stephenson’s Rocket was the winner of the famous Rainhill trials and one of the first locomotives to run along the Liverpool and Manchester Railway, the world’s first passenger train line that opened in 1830. This float pays homage to the iconic design of Rocket and also gives a nod to the horses who used to pull goods up and down the Manchester Ship Canal, before the railway was built, with its carriages full of holidaying horses.

Power of the Future

Designed entirely by the young people of Manchester, this float is a powerful representation of how they see the world at the moment, and their hopes for the future. Expect to be challenged and surprised!

The 3.4 metre high puppet of a Syrian girl refugee who arrived in Manchester last summer - will be out and about in the city centre during the day, where she will happen upon the Parade in a spectacular fashion - before taking in all the sights and sounds of the unforgettable annual parade as it makes its way through the city streets.

Is just that. A home where everyone is accepted and included.

Takes inspiration from the railway arches that are an integral part of the fabric of Manchester and reflects how they are being adapted for a greener, more sustainable future.

All activity in Piccadilly Gardens has been programmed by young people, including street dance, soulful acoustic sets, urban positive rapping, an Instagram wall, a graffiti wall for young people to express what Manchester means to them through art and creativity, climbing wall, sports sessions courtesy of MCR Active, face-painting.

Manchester Day sponsor activity and the big Manchester letters - a magnificent installation of human sized love letters to the city, created by three local artists and Manchester people in 2021 as part of the Thank You Manchester Weekender. 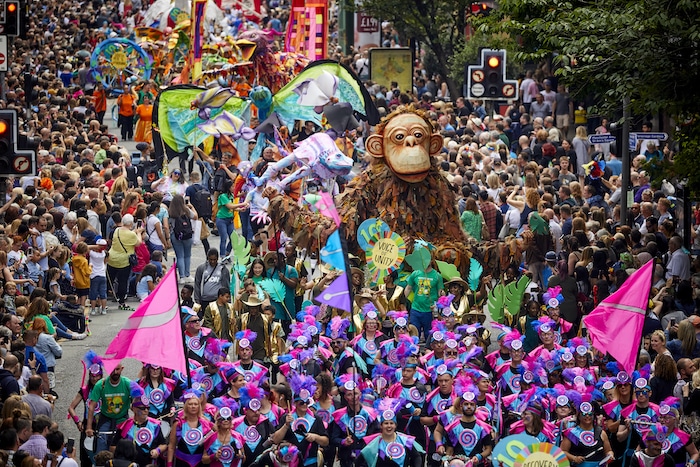 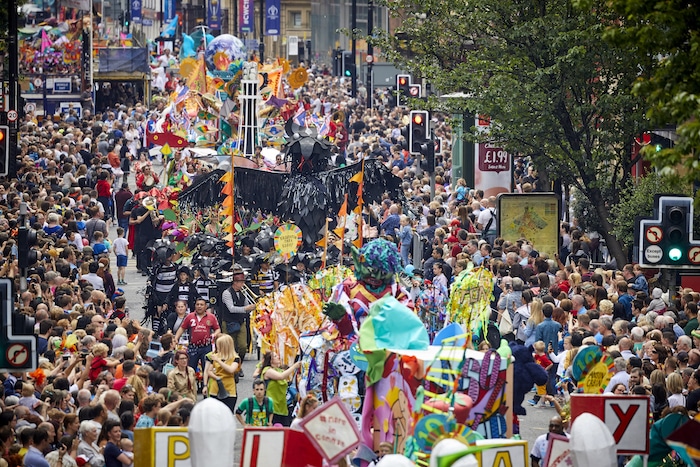 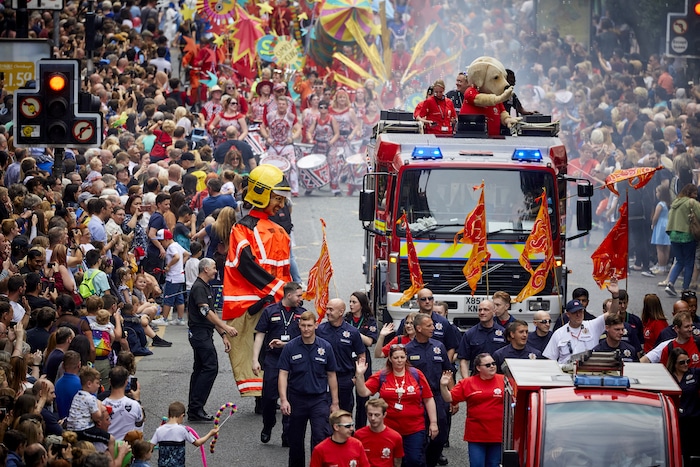 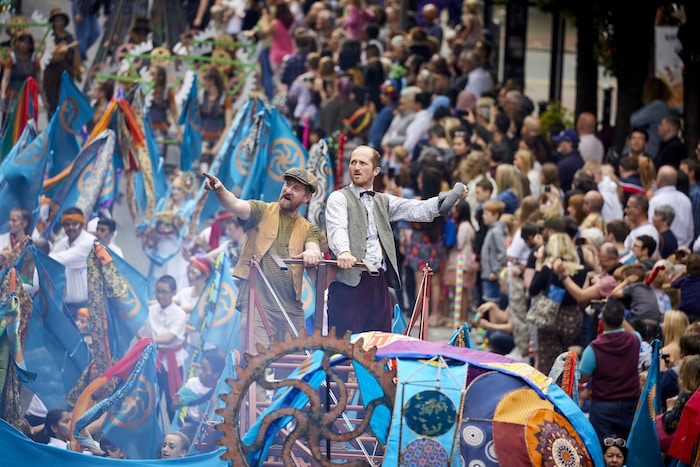 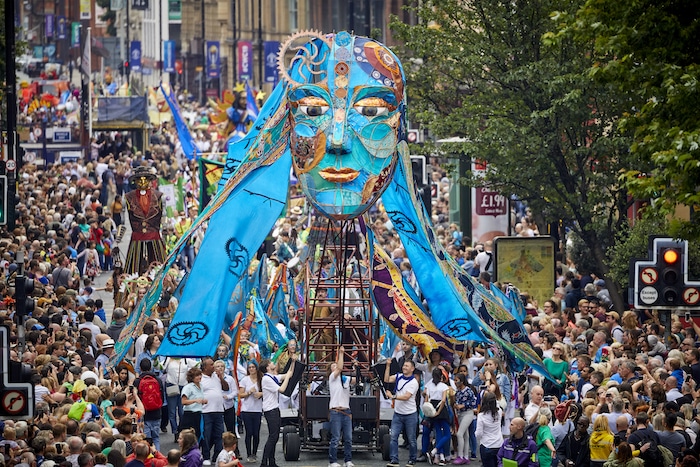 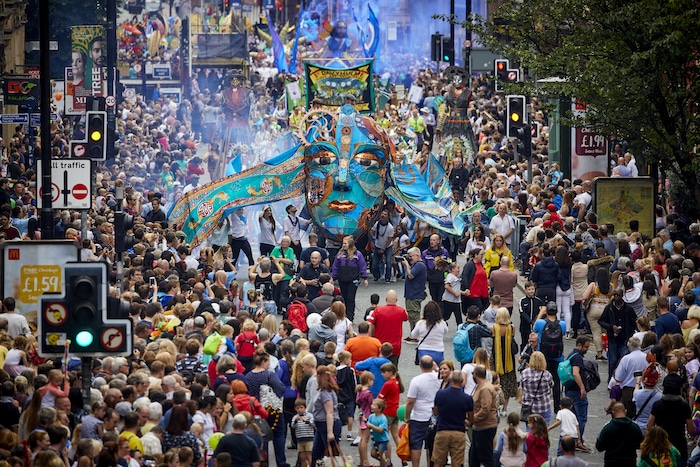 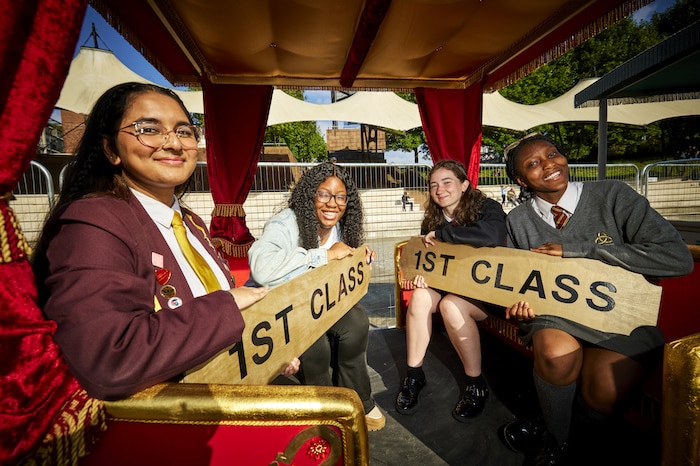 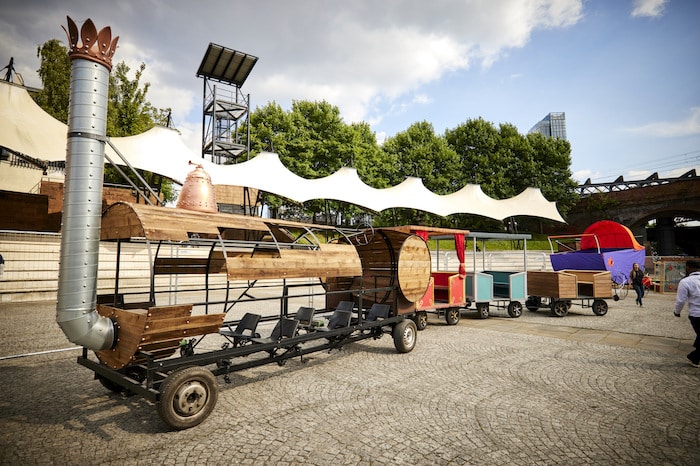 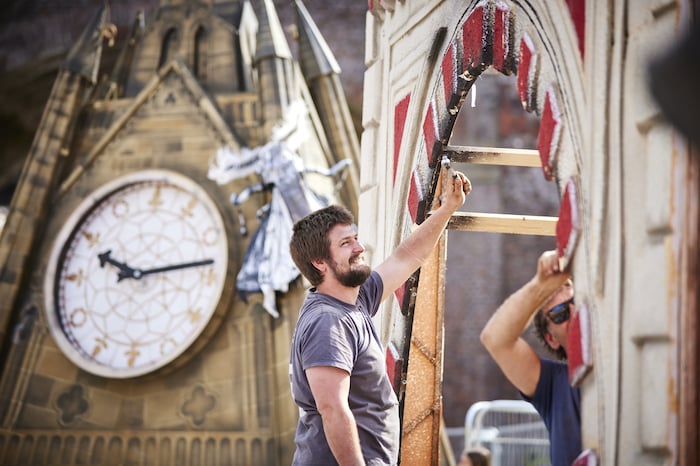